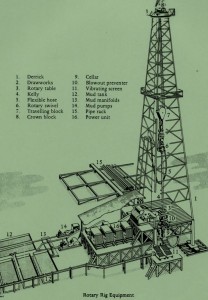 The April edition of Current Anthropology is out now. In this issue, Yale University’s Douglas Rogers discusses how petrobarter – the exchange of oil for goods and services – had real implications for the political landscape of post-Cold War Russia, and how, as a practice on the rise, it continues to affect world regions and their populations.

Oil, perhaps more closely and more pervasively than any other commodity, is associated with the circulation of money. From corner gas stations to high politics, from funding for social and economic development projects to global economic forecasts, the relationship between oil and money seems to be everywhere in our societies. But oil and oil products are not always exchanged for money. A new article in Current Anthropology focuses on petrobarter: the direct exchange of oil for goods and services. Petrobarter has been a more common and more significant dimension of local, regional, and global exchange than has previously been understood, as examples from post-Soviet Russia and the global oil trade in the early Cold War illustrate.

Precisely because it avoids global monetary circuits and the political and economic institutions channeling them, petrobarter has often generated imaginations—both dreams and fears—of alternate global or regional orders. Petrobarter has also been an important generator of inequalities, and is a tool that corporations, states, and elites have used to corner markets and accumulate wealth and power. These petrobarter dynamics are especially clear when the examples are drawn from Soviet and post-Soviet Russia, as opposed to the much more commonly analyzed colonial and postcolonial states—from Nigeria to Venezuela to Saudi Arabia—where Western oil companies and their successors have long operated.

In the Perm Region of the Russian Urals in the 1990s, for instance, in the conditions of widespread economic collapse and demonetization that followed the end of the Soviet Union, petrobarter was central to the formation of a new regional political and economic elite. It was, in key part, through the barter of both crude and refined oil for foodstuffs and many other goods that the Perm Region weathered the crisis years of the 1990s and emerged as a significant oil-producing region by the early 2000s. The fact that these exchanges took place through very localized barter rather than through transactions involving state-issued monetary currency made petrobarter crucial to the creation of a new and specifically regional sense of Permian identity.

China, Ecuador, Ghana, Venezuela, Cuba, Iran, the Democratic Republic of Congo, Angola, Russia, and a number of other counties have recently proposed or entered into petrobarter transactions, most notably oil-for-infrastructure deals between China and African states and oil-for-doctors exchanges between Venezuela and Cuba. With this type of transaction on the rise around the world, and in the conditions of ongoing global economic instability, it is especially useful to track petrobarter’s long history and its relationship to both patterns of inequality and varieties of political arrangements.

Current Anthropology is a transnational journal devoted to research on humankind, encompassing the full range of anthropological scholarship on human cultures and on the human and other primate species. The journal is published by The University of Chicago Press and sponsored by the Wenner-Gren Foundation for Anthropological Research.