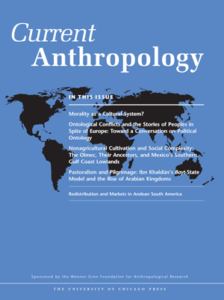 On November 20, 2018, Dr. Cyril S. Belshaw, the second editor of Current Anthropology, the Wenner-Gren Foundation’s flagship journal, passed away in Vancouver, Canada.   He guided Current Anthropology through a formative phase in its growth, taking over from the founder, Sol Tax, in 1974.  Known for his extensive research in New Guinea, Fiji, and British Columbia, Dr. Belshaw wrote for broad audiences on topics ranging from urbanism in Papua to the future of the Canadian university.   An avid promotor of global dialogue in anthropology, he served as President of the International Union of Anthropological and Ethnological Sciences and was an honorary lifetime member of Royal Anthropological Institute, the Pacific Science Association and the Association for the Social Anthropology of Oceania.  The Foundation is grateful for his service to the discipline. We extend our condolences to his friends and family on their loss.