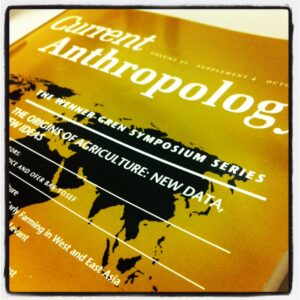 This 4th supplementary issue of the Wenner-Gren Symposia Series in Current Anthropology  brings together a diverse international group of archaeological scientists to consider a topic of common interest and substantial anthropological import—the origins of agriculture. The volume is the outcome of a Wenner-Gren Symposium, (number 141) held from March 6-13, 2009, at the Hacienda Temozon,  Yucatan, Mexico. The group included individuals working in most of the places where farming began. This resulting volume is organized by chronology and geography. The goal was to consider the most recent data and ideas from these different regions in order to examine larger questions of congruity and disparity among the groups of first farmers. There is much new information from a number of important areas, particularly Asia. Findings highlight at least 10 different places around the world where agriculture was independently developed, and the antiquity of domestication is being pushed back in time in light of these discoveries. The volume emphasizes the importance of a multidisciplinary approach to such large questions in order to assemble as much information as possible and anticipates that the results and consequences of the symposium and this supplementary issue will have long-term ripple effects in anthropology and archaeology. The Wenner-Gren Symposia series is available through Current Anthropology as open access, permitting an international community of scholars to access and share these findings.

See the Table of Contents and access full texts here.