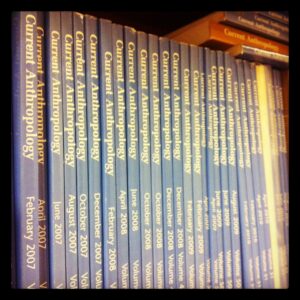 We at the Wenner-Gren Foundation are very proud of our sponsored journal Current Anthropology, published by the University of Chicago Press. In honor of the release of the April issue of CA, we’re pleased to announce that the issue’s Forum on Anthropology and the Public will be available for all as a downloadable open-access article.

This interdisciplinary forum addresses the communication of cultural knowledge of environmental change. Titled “Communicating Climate Knowledge: Proxies, Processes, Politics,” the forum is the product of discussion at a Climate Histories conference held at the University of Cambridge in 2011.

The forum features two lead pieces by Simon Schaffer, a historian of science, and Kirsten Hastrup, an anthropologist, which highlight the role of agents and proxies—indicators that enable the representation and assessment of a certain environmental setting.

Hastrup’s article examines the role ice plays in climate knowledge for arctic peoples. She argues that the ice itself makes as powerful a case for a changing climate as science ever could. “I would suggest that the ice is its own argument; it is not for us to argue its case—it would only be a faint echo of its own powerful impression upon the Arctic world,” she writes. “Whatever climate history one wants to tell, it begins and ends with ice.”

Schaffer offers a historical account of mountains as proxies for western understanding of climate. He describes the work of the nineteenth century scientist John Tyndall in bringing his mountaintop discoveries to the public at large. Schaffer argues that the challenge for science then and now is finding ways to communicate knowledge that is often “judged remote, socially, geographically, and temporally.”

The two lead pieces are followed by five interdisciplinary commentaries that engage with the lead articles through new ethnographic material and a set of reflections by leading scholars of different disciplines, including a lead scholar of the Intergovernmental Panel on Climate Change. “We hope these cross-disciplinary exchanges will encourage further conversations and new approaches to action,” Diemberger said.

The forum is available free to all.

In addition to this piece, the entirety of April’s gold-covered Supplementary issue, “The Biological Anthropology of Living Human Populations: World Histories, National Styles, and International Networks” is available as open access.

(Thanks to UChicago Press’ Kevin Stacey for his help with the text of this post.)