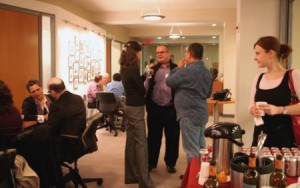 The Anthropology Section of the New York Academy of Sciences began its 2011 season on September 26, 2011 with a special forum in honor of the work and intellectual contribution of Anthropologist Fernando Coronil. Further talks are scheduled throughout the year and will be posted as information becomes available.  Look below the cut for information on individual talks.

The Anthropology Section of the New York Academy of Sciences continues its third season of talks, for the 2011/2012 academic year, at the Wenner-Gren Foundation offices. AS with the previous years, all seminars are preceded by a dinner and are open to the public. Join us for another set of lively presentations from speakers engaged with a range of topics from throughout the field.

Beyond Imperial Knowledge: A Forum Inspired by the Work of Fernando Coronil

The Contradictions of “Combined Development:” Some Reflections on Environmental Crises in India

Over the last two decades, the spectacular growth of the Indian economy has been integrally related to deepening forms of inequality and heightened forms of direct and indirect forms of state violence. Hyperconsumerism, in its various guises, by a small yet sizeable “middle class,” land grabs by a variety of national and global conglomerates (especially mining companies), and the forced relocation of millions of poor and indigenous rural dwellers, are some of the highlights of the current development model. This paper seeks to explore some of the contradictions in this model by analyzing multiple environmental crises (ranging from natural resource privatization and depletion to enclosures and denial of livelihood rights) that have emerged. It argues that efforts by the state and capital to “manage” such crises not only uphold the basic tenets of a “growth” model but also deepen conditions of conflict and violence borne by the poor majority  .

Talking up the Jews: Discourses of Tolerance, Multiculturalism and Jewishness in Amsterdam’s Public Culture

Although Jews make up a minute proportion of Amsterdam’s population, they figure prominently in the city’s story about itself. Jews’ inclusion in the body politic, however, is tenuous; across a wide array of discursive settings, Jews are created as simultaneously insiders and outsiders. This double-edged positionality serves as a strategic resource available for Amsterdammers to pick up and use for multiple goals related to the construction of multiple divergent local identities for themselves, other residents, and the city at-large. While such a tenuous inclusion might seem to be indicative of a positionality in flux, I argue that the symbolic utility of Jews as both insiders and outsiders leads to a positionality that is actually quite stable. In this paper, I investigate how insider/outsider identities are created in such domains as discussions/examples of Yiddish borrowings in Amsterdam Dutch; discursive and material practices of Ajax soccer fans (the local soccer team); museum and tourism materials; media reports asserting that local Muslims (particularly those of Moroccan descent) are antisemitic; government efforts to ban ritual slaughter and the Dutch medical association’s official discouraging of circumcision.

The Earliest Human Ancestors: Sorting the Contenders From the Pretenders

Based on a combination of molecular and paleontological evidence, the human evolutionary lineage appears to have diverged from that of our closest living relatives, the chimpanzees, between 6 and 8 million years ago.  In the past two decades, teams of paleontologists working in Ethiopia, Kenya and Chad have recovered spectacular fossil finds that date to this critical time period. These finds, referred to Ardipithecus, Orrorin and Sahelanthropus, have been claimed to be the earliest members of the human evolutionary lineage (or hominins).  This lecture explores the inherent difficulties in identifying the earliest hominins and in drawing inferences about their evolutionary relationships.  When viewed in a broader comparative context and with a critical appreciation of the limitations of the evidence and methods employed, it is possible to reassess claims about the phylogenetic relationships of the earliest purported hominins.

The Archaeology of Burning Man

Epidemiologists and medical anthropologists alike have participated in the construction of historic frameworks designed to characterize broad eras of human disease transition.  While the dominance of infectious and chronic diseases, respectively, have been said to characterize the first and second epidemiological transitions, a rapidly changing world has made it difficult to agree upon the prevailing features of the contemporary era of human disease. It is the argument of this presentation that one of the foremost threats to 21st century health is an ever more complex array of adversely interacting diseases, infectious and chronic (including chronic infectious diseases) the spread of which is being driven by the dual (and often interacting) forces of globalism and global warming.  To that degree that identifying distinct eras of epidemiological transition remains useful approach to conceiving the history of global health, syndemics—as deleterious disease interactions have been labeled–promise to be a critical component of another alteration in the global health profile of humanity.  In this process, human inequality will continue to be a determinant of how this transition is differential experienced and differential produced through human action.
April 30, 2012

Ben Zimmer, Past columnists for the New York Times

Dinner and Reception at 6.00 pm at the Wenner-Gren Foundation. Suggested minimum contribution for dinner  $10