Watch Now! Anthropological Perspectives on Race, Nation and for Whom Is American Great? 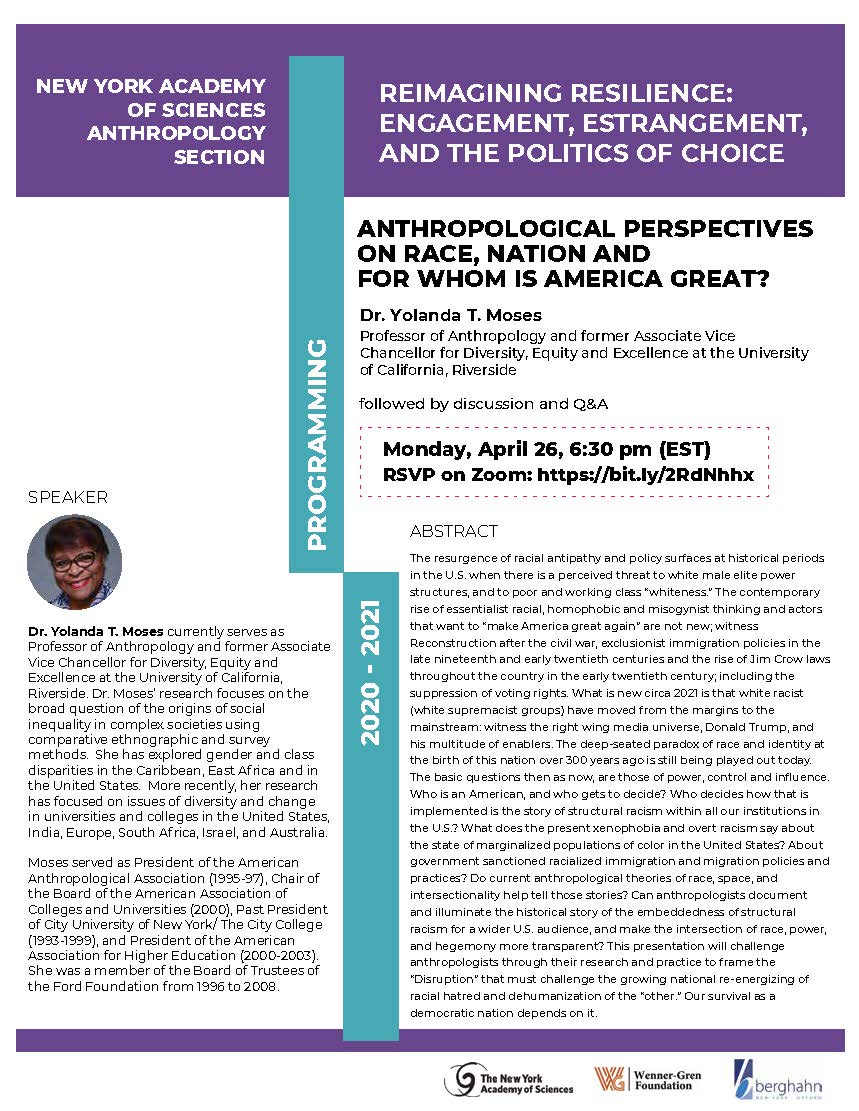 On Monday, April 26th, the New York Academy of Sciences hosted, “”Anthropological Perspectives on Race, Nation and for Whom Is American Great?” Watch it now!

The resurgence of racial antipathy and policy surfaces at historical periods in the U.S. when there is a perceived threat to white male elite power structures, and to poor and working class “whiteness.” The contemporary rise of essentialist racial, homophobic and misogynist thinking and actors that want to “make America great again” are not new; witness Reconstruction after the civil war, exclusionist immigration policies in the late nineteenth and early twentieth centuries and the rise of Jim Crow laws throughout the country in the early twentieth century; including the suppression of voting rights. What is new circa 2021 is that white racist ( white supremacist groups) have moved from the margins to the mainstream: witness the right wing media universe, Donald Trump, and his multitude of enablers. The deep-seated paradox of race and identity at the birth of this nation over 300 years ago is still being played out today. The basic questions then as now, are those of power, control and influence. Who is an American, and who gets to decide? Who decides how that is implemented is the story of structural racism within all our institutions in the U.S.? What does the present xenophobia and overt racism say about the state of marginalized populations of color in the United States? About government sanctioned racialized immigration and migration policies and practices? Do current anthropological theories of race, space, and intersectionality help tell those stories? Can anthropologists document and illuminate the historical story of the embeddedness of structural racism for a wider U.S. audience, and make the intersection of race, power, and hegemony more transparent? This presentation will challenge anthropologists through their research and practice to frame the “Disruption” that must challenge the growing national re-energizing of racial hatred and dehumanization of the “other.” Our survival as a democratic nation depends on it.

Dr. Yolanda T. Moses currently serves as Professor of Anthropology and former Associate Vice Chancellor for Diversity, Equity and Excellence at the University of California, Riverside. Dr. Moses’ research focuses on the broad question of the origins of social inequality in complex societies using comparative ethnographic and survey methods.  She has explored gender and class disparities in the Caribbean, East Africa and in the United States.  More recently, her research has focused on issues of diversity and change in universities and colleges in the United States, India, Europe, South Africa, Israel, and Australia.

She has been involved on the steering groups of several U.S. National higher education projects with the National Council for Research on Women, Campus Women Lead and The Women of Color Research Collective. In addition, she was Chair of the National Advisory Board of a multi-year national public education project sponsored by the American Anthropological Association and funded by NSF and the Ford Foundation on Race and Human Variation. See: www.understandingrace.org. The goal of the project was to change the way the nation understood and talked about the meaning and consequences of “race.” She was Co-PI on a Ford Foundation grant that sponsored phase two of that work.

She was the PI on an NSF ADVANCE Grant, (2011 to 2015) to advance the role of women faculty in the STEM Fields; an NEH Grant (2011-12) to create a national educational network for educators to develop a bio-cultural approach to the teaching of race in high school and in undergraduate social science and biology classes.

At the University of California, she was a co-founder and on the Steering Committee of the UC wide research project, UCCNRS (University of California Center for New Racial Studies). The mission of the Center is to support innovation in UC-based race/racism research and teaching and to encourage interdisciplinary and collaborative work focused on advancing social/racial justice in an era of changing racial dynamics and persistent racial/ethnic conflict and inequality.

She is the co-author also with Carol Mukhopadhyay and Rosemary Henze, Professors at CSU San Jose of the book: How Real is Race: A Sourcebook on Race, Culture and Biology. (2007) Rowman and Littlefield; (2014) Altamira Press. She is also co-Author along with Alan Goodman and Joseph Jones, of the book, Race: Are We So Different? published by Wiley-Blackwell (2020).