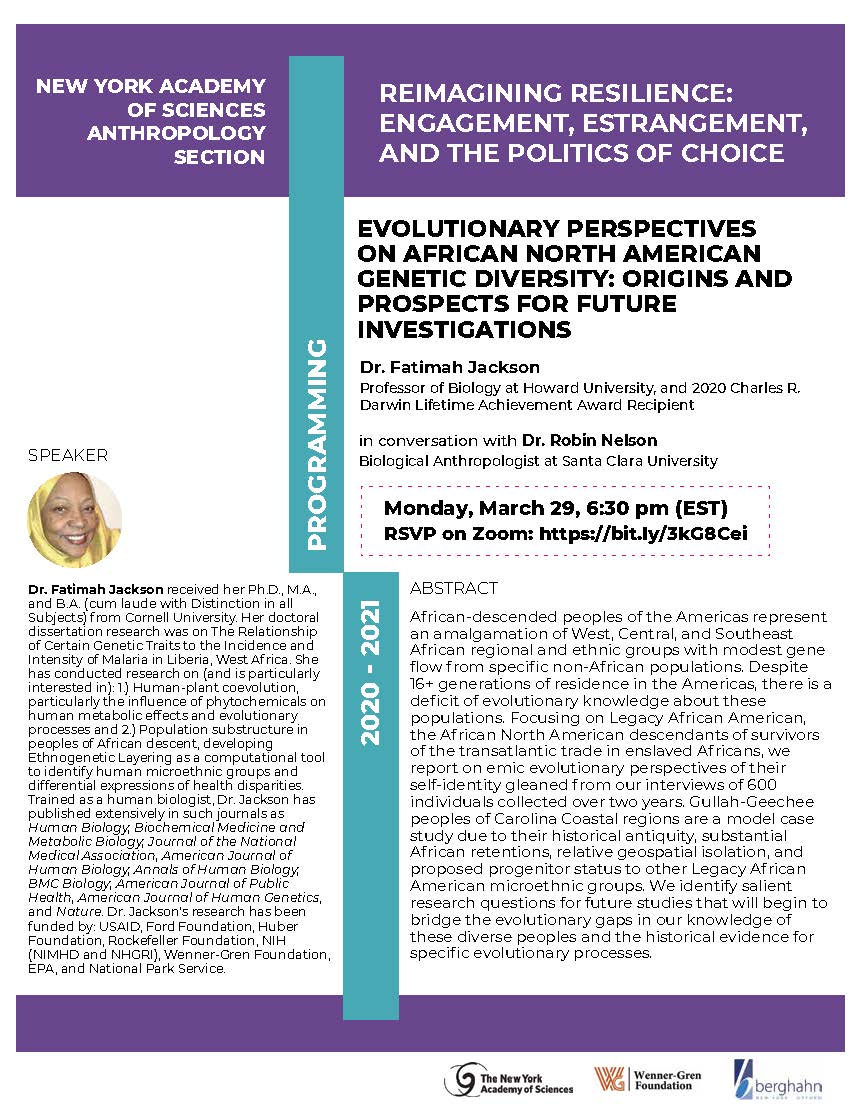 African-descended peoples of the Americas represent an amalgamation of West, Central, and Southeast African regional and ethnic groups with modest gene flow from specific non-African populations. Despite 16+ generations of residence in the Americas, there is a deficit of evolutionary knowledge about these populations. Focusing on Legacy African American, the African North American descendants of survivors of the transatlantic trade in enslaved Africans, we report on emic evolutionary perspectives of their self-identity gleaned from our interviews of 600 individuals collected over two years. Gullah-Geechee peoples of Carolina Coastal regions are a model case study due to their historical antiquity, substantial African retentions, relative geospatial isolation, and proposed progenitor status to other Legacy African American microethnic groups. We identify salient research questions for future studies that will begin to bridge the evolutionary gaps in our knowledge of these diverse peoples and the historical evidence for specific evolutionary processes.

Dr. Fatimah Jackson received her Ph.D., M.A., and B.A. (cum laude with Distinction in all Subjects) from Cornell University. Her doctoral dissertation research was on The Relationship of Certain Genetic Traits to the Incidence and Intensity of Malaria in Liberia, West Africa. She has conducted research on (and is particularly interested in): 1.) Human-plant coevolution, particularly the influence of phytochemicals on human metabolic effects and evolutionary processes and 2.) Population substructure in peoples of African descent, developing Ethnogenetic Layering as a computational tool to identify human microethnic groups and differential expressions of health disparities. Trained as a human biologist, Dr. Jackson has published extensively in such journals as Human Biology, Biochemical Medicine and Metabolic Biology, Journal of the National Medical Association, American Journal of Human Biology, Annals of Human Biology, BMC Biology, American Journal of Public Health, American Journal of Human Genetics, and Nature. Dr. Jackson’s research has been funded by: USAID, Ford Foundation, Huber Foundation, Rockefeller Foundation, NIH (NIMHD and NHGRI), Wenner-Gren Foundation, EPA, and National Park Service. Dr. Jackson has taught at Cornell University, University of California – Berkeley, University of Florida, University of Maryland – College Park (where she is Distinguished Scholar Teacher and Professor Emerita), University of North Carolina – Chapel Hill (where she directed the Institute for African American Research) and now at Howard University. She has been a Visiting Scholar at University of Georgia and University of Khartoum in Sudan and she was a Senior Fulbright Fellow in Egypt. She has been awarded the Nick Norgan Award for 2009 Best Article Published in Annals of Human Biology. In 2012 she was the first recipient of the Ernest E. Just Prize in Medical and Public Health Research, Avery Research Institute, College of Charleston and Medical University of South Carolina (University of South Carolina). In 2012, she was also Coined by Rear Admiral Dr. Helena Mishoe, National Institutes of Health, NHLBI and US Public Health Service. In 2017 Howard University named her STEM Woman Researcher of the Year. In 2020 the American Association of Physical Anthropologists awarded Dr. Jackson the Charles R. Darwin Lifetime Achievement Award. Dr. Jackson is a Senior Scientist at QuadGrid and CEO at the Dumont Institute, a multidisciplinary think tank.

Dr. Robin Nelson is a biological anthropologist who utilizes evolutionary theory in studies of family dynamics and health outcomes for adults and children. Having conducted a decade of research in Jamaica, her more recent work explores the relationship between growth outcomes and residential context for Jamaican children. She examines what happens to the social and physical health of children when the home, as it is articulated in West Indian communities, is not available to them. She is currently developing a project exploring the lives of Caribbean immigrants and their children in Toronto, Canada. With a focus on critical periods of growth and development, she investigates culturally salient forms of social and financial capital and the health of peoples from the Caribbean. In addition to this primary research, Robin and colleagues have worked extensively on issues surrounding sexual harassment and assault in field settings.