Watch Now! African Diasporic Activist Scholarship: Beyond the Enlightenment, Toward the Democratization of Science 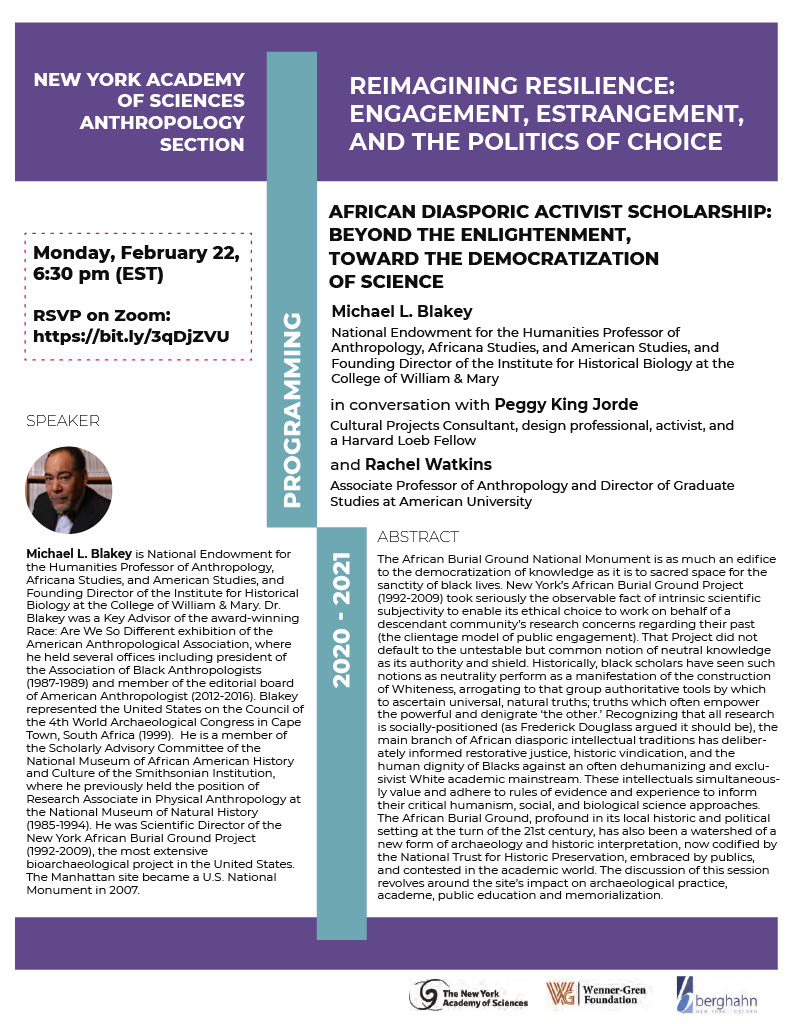 On Monday, February 22nd, the New York Academy of Sciences hosted, “African Diasporic Activist Scholarship: Beyond the Enlightenment, Toward the Democratization of Science.” Watch it now!

National Endowment for the Humanities Professor of Anthropology, Africana Studies, and American Studies, and Founding Director of the Institute for Historical Biology at the
College of William & Mary

Michael L. Blakey is National Endowment for the Humanities Professor of Anthropology, Africana Studies, and American Studies, and Founding Director of the Institute for Historical Biology at the College of William & Mary. Dr. Blakey was a Key Advisor of the award-winning Race: Are We So Different exhibition of the American Anthropological Association, where he held several offices including president of the Association of Black Anthropologists (1987-1989) and member of the editorial board of American Anthropologist (2012-2016). Blakey represented the United States on the Council of the 4th World Archaeological Congress in Cape Town, South Africa (1999). He is a member of the Scholarly Advisory Committee of the National Museum of African American History and Culture of the Smithsonian Institution, where he previously held the position of Research Associate in Physical Anthropology at the National Museum of Natural History (1985-1994). He was Scientific Director of the New York African Burial Ground Project (1992-2009), the most extensive bioarchaeological project in the United States. The Manhattan site became a U.S. National Monument in 2007.

Peggy King Jorde is a Cultural Projects Consultant, design professional, activist, and a Harvard Loeb Fellow recognized for her extraordinary efforts to preserve New York City’s African Burial Ground. As Director of Memorialization, King Jorde spearheaded efforts for the national monument & historic district, the Interpretive Center, and the reburial of more than 400 African ancestors. Harvard Magazine’s article “Life By Design” chronicles Peggy’s journey from her native Albany, Georgia, to her academic pursuits at Harvard School of Design. King Jorde brings a wide range of experience in civic development, from providing project oversight for New York’s most iconic museums and cultural institutions to chairing blue-ribbon committees, including the Malcolm X Memorial with the late Dr. Betty Shabazz to being a key influencer on art panels tasked with commissioning art for public spaces. Formerly a special adviser to NYC Mayor David N. Dinkins, King Jorde currently lends considerable focus to campaigns that protect disenfranchised histories. She is working with global stakeholders to preserve an African Burial Ground on St. Helena, UK, in the South Atlantic. She is an impact producer & film participant for a London based documentary about preserving the Liberated African Burial Ground and Depot.

Rachel Watkins is a biocultural anthropologist with an emphasis on African American biohistory and social history, bioanthropological research practices and histories of (US) American biological anthropology. Initially trained in skeletal biology, her work focused on looking at relationships between health, disease, and social location in people whose remains are in the W. Montague Cobb anatomical collection and interred at the New York African Burial Ground. Studies were carried out in the scholar-activist tradition of deconstructing racialized interpretations of human biology, and the centering of Black bodies in constructing racial categories and hierarchies. This research led to a broader interest in how African American skeletal remains and living populations were centered in the development of research practices and racial formation in US biological anthropology. Current projects continue to draw on intellectual and political work tied to Cobb and his laboratory from 1932 to the present as sites for understanding science as a social practice. This includes: 1) traditions of Black scholar-activism contesting scientific racism; 2) our field’s efforts toward critiquing scientific racism without attending to structural racism; and, 3) the positionality of scientific researchers.

The African Burial Ground National Monument is as much an edifice to the democratization of knowledge as it is to sacred space for the sanctity of black lives. New York’s African Burial Ground Project (1992-2009) took seriously the observable fact of intrinsic scientific subjectivity to enable its ethical choice to work on behalf of a descendant community’s research concerns regarding their past (the clientage model of public engagement). That Project did not default to the untestable but common notion of neutral knowledge as its authority and shield. Historically, black scholars have seen such notions as neutrality perform as a manifestation of the construction of Whiteness, arrogating to that group authoritative tools by which to ascertain universal, natural truths; truths which often empower the powerful and denigrate ‘the other.’ Recognizing that all research is socially-positioned (as Frederick Douglass argued it should be), the main branch of African diasporic intellectual traditions has deliberately informed restorative justice, historic vindication, and the human dignity of Blacks against an often dehumanizing and exclusivist White academic mainstream. These intellectuals simultaneously value and adhere to rules of evidence and experience to inform their critical humanism, social, and biological science approaches. The African Burial Ground, profound in its local historic and political setting at the turn of the 21st century, has also been a watershed of a new form of archaeology and historic interpretation, now codified by the National Trust for Historic Preservation, embraced by publics, and contested in the academic world. The discussion of this session revolves around the site’s impact on archaeological practice, academe, public education and memorialization.