Watch Now! What Is the Utility of Anthropology in This Moment of Emergency? 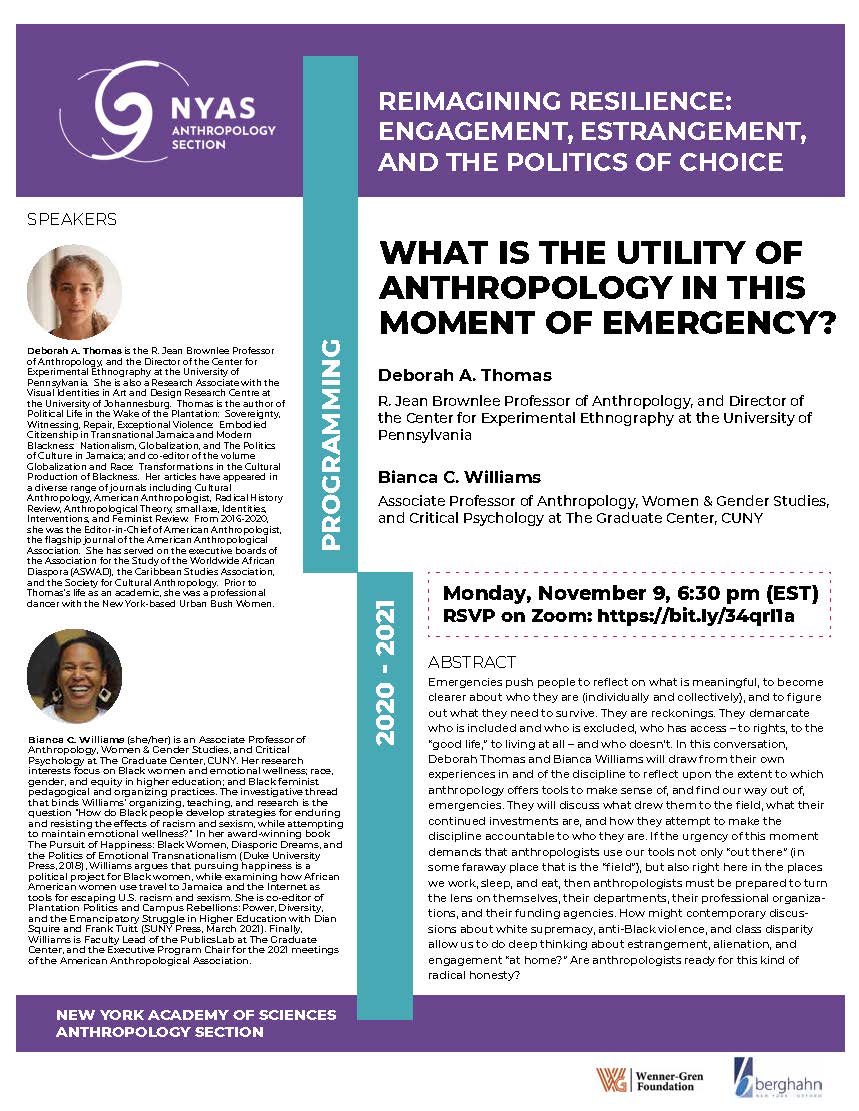 On November 9th the New York Academy of Sciences hosted the lecture, “What Is the Utility of Anthropology in This Moment of Emergency?” Watch it now.

Emergencies push people to reflect on what is meaningful, to become clearer about who they are (individually and collectively), and to figure out what they need to survive. They are reckonings. They demarcate who is included and who is excluded, who has access – to rights, to the “good life,” to living at all – and who doesn’t. In this conversation, Deborah Thomas and Bianca Williams will draw from their own experiences in and of the discipline to reflect upon the extent to which anthropology offers tools to make sense of, and find our way out of, emergencies. They will discuss what drew them to the field, what their continued investments are, and how they attempt to make the discipline accountable to who they are. If the urgency of this moment demands that anthropologists use our tools not only “out there” (in some faraway place that is the “field”), but also right here in the places we work, sleep, and eat, then anthropologists must be prepared to turn the lens on themselves, their departments, their professional organizations, and their funding agencies. How might contemporary discussions about white supremacy, anti-Black violence, and class disparity allow us to do deep thinking about estrangement, alienation, and engagement “at home?” Are anthropologists ready for this kind of radical honesty?

Jean Brownlee Professor of Anthropology, and Director of the Center for Experimental Ethnography at the University of Pennsylvania

Deborah A. Thomas is the R. Jean Brownlee Professor of Anthropology, and the Director of the Center for Experimental Ethnography at the University of Pennsylvania.  She is also a Research Associate with the Visual Identities in Art and Design Research Centre at the University of Johannesburg.  Thomas is the author of Political Life in the Wake of the Plantation:  Sovereignty, Witnessing, Repair, Exceptional Violence:  Embodied Citizenship in Transnational Jamaica and Modern Blackness:  Nationalism, Globalization, and The Politics of Culture in Jamaica; and co-editor of the volume Globalization and Race:  Transformations in the Cultural Production of Blackness.  Her articles have appeared in a diverse range of journals including Cultural Anthropology, American Anthropologist, Radical History Review, Anthropological Theory, small axe, Identities, Interventions, and Feminist Review.  Thomas has also co-directed and co-produced two documentary films:  BAD FRIDAY:  RASTAFARI AFTER CORAL GARDENS, which chronicles violence in Jamaica through the eyes of its most iconic community; and FOUR DAYS IN MAY:  KINGSTON 2010, which explores the effects of the “Tivoli Incursion” in May 2010, when Jamaican security forces entered West Kingston to arrest Christopher Coke, wanted for extradition to the United States, and killed at least 75 civilians.  Thomas is also the co-curator of a multi-media installation titled Bearing Witness:  Four Days in West Kingston, which opened at the Penn Museum in November 2017.  Thomas edited the journal Transforming Anthropology from 2007-2010, and currently sits on the editorial boards of Social and Economic Studies and Anthropological Theory.  From 2016-2020, she was the Editor-in-Chief of American Anthropologist, the flagship journal of the American Anthropological Association.  She has served on the executive boards of the Association for the Study of the Worldwide African Diaspora (ASWAD), the Caribbean Studies Association, and the Society for Cultural Anthropology.  Prior to Thomas’s life as an academic, she was a professional dancer with the New York-based Urban Bush Women.

Bianca C. Williams (she/her) is an Associate Professor of Anthropology, Women & Gender Studies, and Critical Psychology at The Graduate Center, CUNY. She earned a graduate certificate in African & African American Studies and her Ph.D. in Cultural Anthropology from Duke University. Her research interests focus on Black women and emotional wellness; race, gender, and equity in higher education; and Black feminist pedagogical and organizing practices. The investigative thread that binds Williams’ organizing, teaching, and research is the question “How do Black people develop strategies for enduring and resisting the effects of racism and sexism, while attempting to maintain emotional wellness?” In her award-winning book The Pursuit of Happiness: Black Women, Diasporic Dreams, and the Politics of Emotional Transnationalism (Duke University Press, 2018), Williams argues that pursuing happiness is a political project for Black women, while examining how African American women use travel to Jamaica and the Internet as tools for escaping U.S. racism and sexism. She is co-editor of Plantation Politics and Campus Rebellions: Power, Diversity, and the Emancipatory Struggle in Higher Education with Dian Squire and Frank Tuitt (SUNY Press, March 2021). Additionally, Williams has written about “radical honesty” as feminist inclusive pedagogy in the volume Race, Equity, and the Learning Environment, and published in the journals Souls, Cultural Anthropology, Teachers College Record, and on the blogs Anthrodendum and Anthropoliteia. She is a recipient of the American Anthropological Association & Oxford University Press Award for Excellence in Undergraduate Teaching of Anthropology. Finally, Williams is Faculty Lead of the PublicsLab at The Graduate Center, and the Executive Program Chair for the 2021 meetings of the American Anthropological Association.

While Wenner-Gren is proud to be providing a platform for this event, the views expressed do not necessarily reflect those of the Foundation.