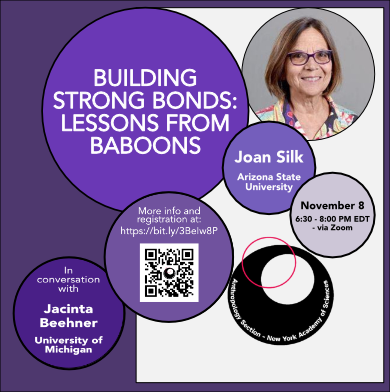 Sociality has evolved in many animal taxa, and reflects a balance between the benefits of living in groups (such as lower risk of predation and greater success in contests with other groups) and costs (greater competition over resources and exposure to infectious disease). Evolution has favored traits that enable individuals to increase the benefit/cost ratio. In some species, close social bonds may have evolved because they provide a means for individuals to increase the benefits and reduce the costs of social life. Baboon females form strong, equitable, supportive, tolerant, and stable social relationships with selected partners, particularly close kin, peers, and the sires of their offspring. These social ties help females cope with various sources of short-term stress, and females with close social bonds also reproduce more successfully and live longer than other females. I will discuss these findings and their implications for understanding the importance of social connections in humans.

Joan Silk moved to ASU’s School of Human Evolution and Social Change in 2012, from University of California, Los Angeles (UCLA). She is interested in how natural selection shapes the evolution of social behavior in primates.

Most of Silk’s empirical work has focused on the behavioral and reproductive strategies of female baboon. She recently initiated a comparative study of the structure and function of close social bonds in four baboon species (anubis, hamadryas, gelada, and chacma).

In particular, Silk is interested in questions that explicitly link studies of nonhuman primates to humans. Experimental work she conducts with chimpanzees and children focuses on the phylogenetic origins and ontogenetic development of prosocial preferences.

Silk received her doctorate from University of California at Davis in 1981, and spent two years as a postdoctoral fellow in the Altmann’s lab at the University of Chicago. She then joined the Department of Anthropology at Emory University.

Silk moved to UCLA in 1986, where she remained until 2012. At UCLA, she was a founding member of the Center of Behavior, Evolution, and Culture and served as department chair for six years.

Jacinta C. Beenher is a Professor in the Department of Psychology and in the Department of Anthropology at the University of Michigan. She is broadly interested in hormones and behavior, specifically as they relate to reproductive success. She founded and currently directs two field sites focused on wild primates: the Simien Mountains Gelada Research Project in Ethiopia (studying geladas) and the Capuchins at Taboga Research Project in Costa Rica (studying white-faced capuchins). She also directs two hormone laboratories – one at the University of Michigan (Beehner Endocrine Laboratory) and one at the Capuchins at Taboga field site (TREX Endocrine Laboratory).