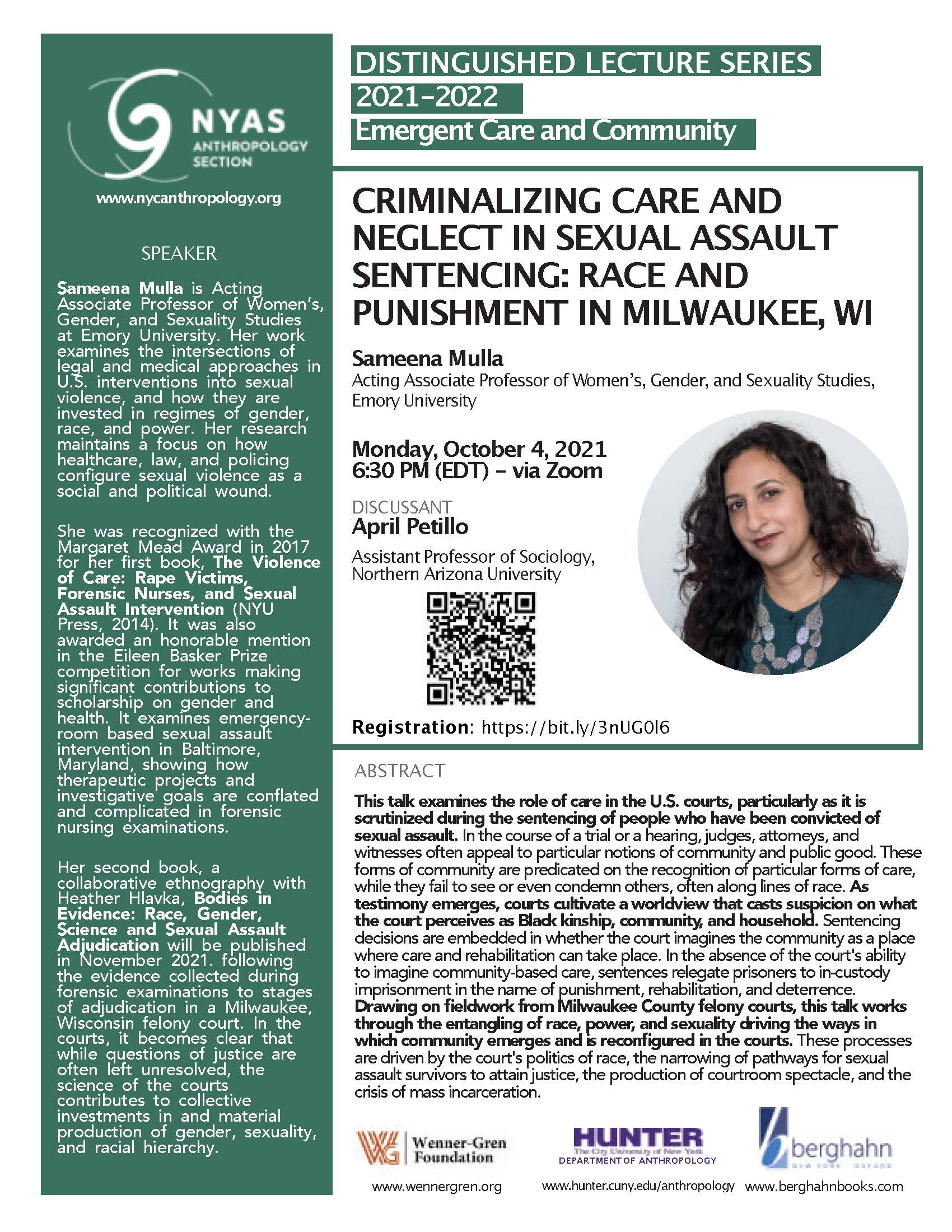 This talk examines the role of care in the U.S. courts, particularly as it is scrutinized during the sentencing of people who have been convicted of sexual assault. In the course of a trial or a hearing, judges, attorneys, and witnesses often appeal to particular notions of community and public good. These forms of community are predicated on the recognition of particular forms of care, while they fail to see or even condemn others, often along lines of race. As testimony emerges, courts cultivate a worldview that casts suspicion on what the court perceives as Black kinship, community, and household. Sentencing decisions are embedded in whether the court imagines the community as a place where care and rehabilitation can take place. In the absence of the court’s ability to imagine community-based care, sentences relegate prisoners to in-custody imprisonment in the name of punishment, rehabilitation, and deterrence. Drawing on fieldwork from Milwaukee County felony courts, this talk works through the entangling of race, power, and sexuality driving the ways in which community emerges and is reconfigured in the courts. These processes are driven by the court’s politics of race, the narrowing of pathways for sexual assault survivors to attain justice, the production of courtroom spectacle, and the crisis of mass incarceration

Dr. Sameena Mulla is Acting Associate Professor of Women’s, Gender, and Sexuality Studies at Emory University. Her work examines the intersections of legal and medical approaches in U.S. interventions into sexual violence, and the ways in which they are invested in regimes of gender, race, and power. In particular, her research maintains a focus on the ways in which healthcare, law, and policing configure sexual violence as a social and political wound.

She was recognized with the American Anthropological Association and Society for Applied Anthropology’s Margaret Mead Award in 2017 for her first book, The Violence of Care: Rape Victims, Forensic Nurses, and Sexual Assault Intervention (New York University Press, 2014). The book was also awarded an honorable mention in the Eileen Basker Prize competition recognizing works making significant contributions to scholarship on gender and health. Her second book, a collaborative ethnography with Heather Hlavka, Bodies in Evidence: Race, Gender, Science and Sexual Assault Adjudication will be published in November 2021.

The Violence of Care examines emergency-room based sexual assault intervention in Baltimore, Maryland, showing how therapeutic projects and investigative goals are conflated and complicated in forensic nursing examinations. Bodies in Evidence follows the evidence collected during forensic examinations to stages of adjudication, this time in a Milwaukee, Wisconsin felony court. In the courts, it becomes clear that while questions of justice are often left unresolved, the science of the courts contributes to collective investments in and material production of gender, sexuality, and racial hierarchy.

She has also written articles that were published in journals such as Medical Anthropology, Law and Society Review, and Gender and Society.