Watch Now: Migration through the Camera Lens: Ethnography, Film, and the Migration Crisis 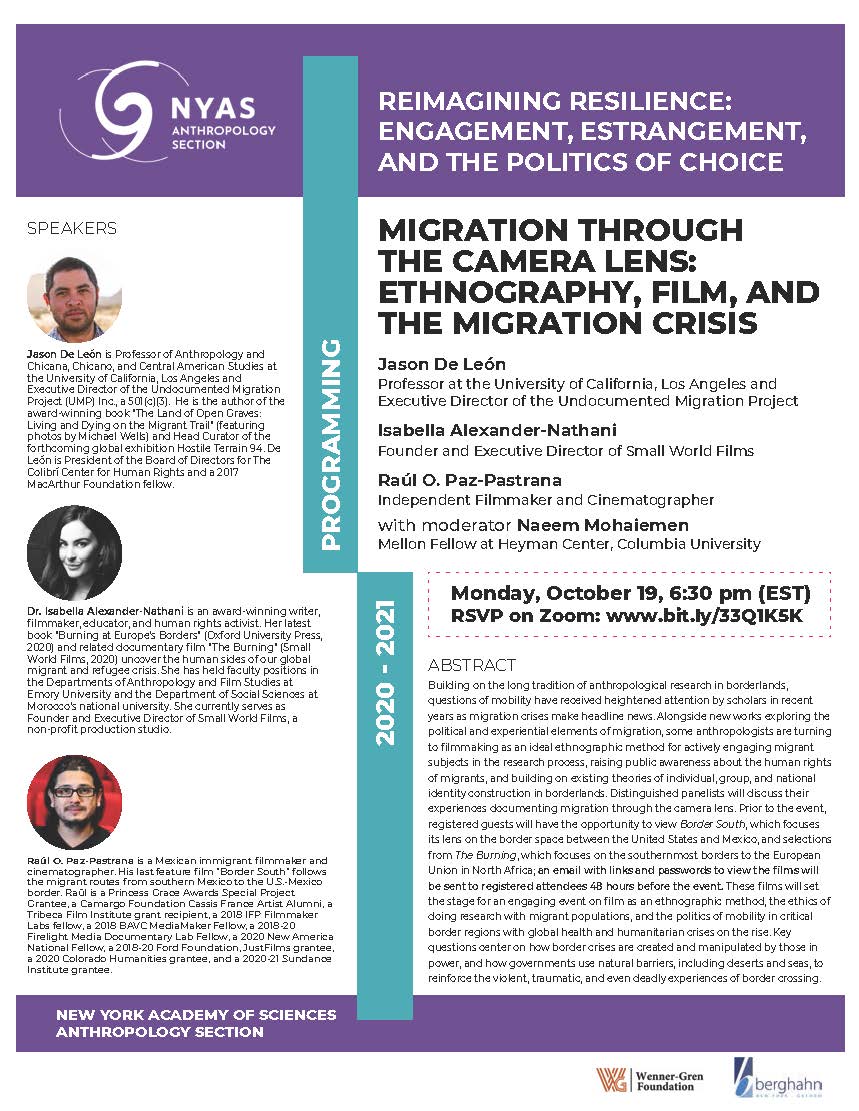 On October 19th the New York Academy of Sciences hosted the lecture, “Migration through the Camera Lens: Ethnography, Film, and the Migration Crisis”. Watch it now.

Building on the long tradition of anthropological research in borderlands, questions of mobility have received heightened attention by scholars in recent years as migration crises make headline news. Alongside new works exploring the political and experiential elements of migration, some anthropologists are turning to filmmaking as an ideal ethnographic method for actively engaging migrant subjects in the research process, raising public awareness about the human rights of migrants, and building on existing theories of individual, group, and national identity construction in borderlands. Distinguished panelists will discuss their experiences documenting migration through the camera lens. Prior to the event, registered guests will have the opportunity to view Border South, which focuses its lens on the border space between the United States and Mexico, and selections from The Burning, which focuses on the southernmost borders to the European Union in North Africa; an email with the links and passwords to view the films will be sent to registered attendees 48 hours before the event. These films will set the stage for an engaging event on film as an ethnographic method, the ethics of doing research with migrant populations, and the politics of mobility in critical border regions with global health and humanitarian crises on the rise. Key questions center on how border crises are created and manipulated by those in power, and how governments use natural barriers, including deserts and seas, to reinforce the violent, traumatic, and even deadly experiences of border crossing.

Professor of Anthropology and Chicana, Chicano, and Central American Studies at the University of California, Los Angeles and Executive Director of the Undocumented Migration Project (UMP)

Jason De León is Professor of Anthropology and Chicana, Chicano, and Central American Studies at the University of California, Los Angeles and Executive Director of the Undocumented Migration Project (UMP) Inc., a 501(c)(3). The UMP is a long-term anthropological study of clandestine migration between Latin America and the United States that uses a combination of ethnographic, visual, archaeological, and forensic approaches to understand this violent social process. He has published numerous academic articles and his work with the UMP has been featured in a variety of popular media outlets. He is the author of the award-winning book “The Land of Open Graves: Living and Dying on the Migrant Trail” (featuring photos by Michael Wells) and Head Curator of the forthcoming global exhibition Hostile Terrain 94. De León is President of the Board of Directors for The Colibrí Center for Human Rights and a 2017 MacArthur Foundation fellow.

Dr. Isabella Alexander-Nathani is an award-winning writer, filmmaker, educator, and human rights activist. Trained as a cultural anthropologist, her work is motivated by her belief that storytelling has the power to humanize complex political issues. Her latest book Burning at Europe’s Borders (Oxford University Press, 2020) and related documentary film The Burning (Small World Films, 2020) uncover the human sides of our global migrant and refugee crisis. Alexander-Nathani’s work has been featured on BBC, CNN, NPR, PRI, and Al Jazeera, and she is a regular contributor to SAPIENS, where she writes a monthly column called “Borders.” Her speaking programs have brought her to stages around the world, including the United Nations General Assembly and the Parliament of the World’s Religions, where she has delivered keynote addresses to audiences of more than 10,000. The American Anthropological Association presented her with the “Emerging Leader in Anthropology” award in 2016, and her latest project has been supported by multiple grants from The National Science Foundation. She has held faculty positions in the Departments of Anthropology and Film Studies at Emory University and the Department of Social Sciences at Morocco’s national university. She currently serves as Founder and Executive Director of Small World Films, a non-profit production studio. She uses grounded social science research and storytelling to lift the voices of marginalized populations to the global stage and fight for international policy change.

Raúl O. Paz-Pastrana is a Mexican immigrant filmmaker and cinematographer. His work intersects contemporary art, political documentary, and visual ethnography to explore themes of belonging, alienation, and the concept of “home.”  His last feature film Border South follows the migrant routes from southern Mexico to the U.S.-Mexico border. The result is a close-up, nuanced, and highly original view of the migrant experience, one fraught with risk and danger but also camaraderie, ingenuity, and humor. Border South had its world premiere at the 2019 Sheffield Doc/Fest in the U.K., its U.S. premiere at the AFI Docs Film Festival in Washington D.C. and its Latin American premiere at the 2020 Guadalajara International Film Festival (FICG) in Mexico. Raúl is a Princess Grace Awards Special Project Grantee, a Camargo Foundation Cassis France Artist Alumni, a Tribeca Film Institute grant recipient, a 2018 IFP Filmmaker Labs fellow, a 2018 BAVC MediaMaker Fellow, a 2018-20 Firelight Media Documentary Lab Fellow, a 2020 New America National Fellow, a 2018-20 Ford Foundation, JustFilms grantee, a 2020 Colorado Humanities grantee, and a 2020-21 Sundance Institute grantee.

MODERATOR
Naeem Mohaiemen makes films and writes essays about rhizomatic families, malleable borders, and socialist utopias – beginning from Bangladesh’s two postcolonial markers (1947, 1971) and then radiating outward to transnational linkages. He is author of Midnight’s Third Child (Nokta, forthcoming) and Prisoners of Shothik Itihash (Kunsthalle Basel, 2014); editor of Chittagong Hill Tracts in the Blind Spot of Bangladesh Nationalism (Drishtipat, 2010); and co-editor with Eszter Szakacs of Solidarity Must be Defended (Tranzit, forthcoming) and with Lorenzo Fusi of System Error: War is a Force that Gives us Meaning (Sylvana, 2007). Naeem is Mellon Fellow at Heyman Center, Columbia University, New York, and Senior Fellow (non-residential) at Lunder Institute of American Art, Colby College, Maine. He is on the board of the Vera List Center for Art & Politics, New School, New York, and the film council of ICA, London.

While Wenner-Gren is proud to be providing a platform for this event, the views expressed do not necessarily reflect those of the Foundation.