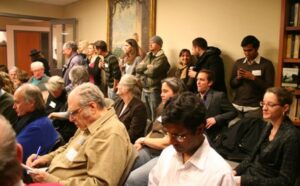 The Anthropology Section of the New York Academy of Sciences is the crossroads for four-field anthropology in the greater New York area. As in previous years, the Wenner-Gren Foundation offices will serve as the location for the section’s monthly lecture series. Below is a schedule of the talks that will occur over the coming academic year, subject to adjustment:

Check back on our blog closer to the date of each talk to learn more about the speaker and get further information on the event arrangements!