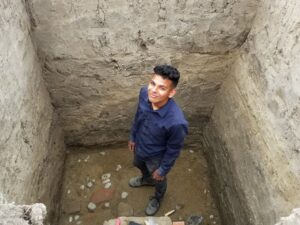 With the support of the Wadsworth International Fellowship Syon Vasquez will continue his training in archeology at University of California, Los Angeles, under the supervision of Richard Lesure.

I initially became interested in archaeology when I participated in excavations at an ancient Maya site in my home country of Belize. Subsequently, I pursued the personal interest that this initial experience engendered by taking up further instruction in archaeology at the University of South Florida, where I completed my BA in anthropology. While at the University of South Florida I undertook fieldwork and research investigating geoglyphs and early state formation on the southern coast of Peru. Additionally, I received training in both paleoethnobotanical as well as geoarchaeological methods.

This diverse background in archaeological theory and methods has given rise to my interest in various questions about past human activity in Belize and its surrounding regions. As it pertains to the pre-Columbian period, I am interested in examining early state formation in Mesoamerica. In particular, I would like to look at whether the same correlation between the proliferation of ritual activity and the emergence of incipient social inequality that I observed in my research on the southern coast of Peru, also occurs at early Mesoamerican sites.

Another one of my interests has to do with the archaeology of the colonial period in Belize. This is a subject that I have had an opportunity to survey more closely during the past several months which I have spent back home in Belize due to the COVID-19 pandemic and the consequent transition to online learning at UCLA. I have observed firstly, that the colonial period is severely understudied and secondly, that there is an abundance of colonial materials ripe for analysis employing archaeological methods. Thus, I am currently looking into the colonial architecture of the country’s largest city, Belize City and the mix of African, Indigenous and European architectural traditions that it preserves.

The fluidity of my research interests at this early stage in my scholarly career informed my decision to take up doctoral studies in the Interdepartmental Program in Archaeology at UCLA. My goal while at UCLA is to draw on the anthropology faculty’s wide array of interdisciplinary skillsets to enhance the holism of my training as an anthropologist, as well as to aid me in elaborating on my existing research interests.