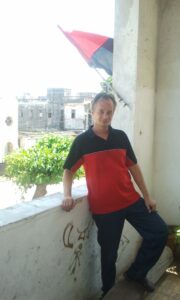 Dmitri Prieto Samsonov received his undergraduate degree from the University of Havana. Thanks to the Wadsworth International Fellowship he will continue his training with a PhD in anthropology at University College London, supervised by Dr. Martin Holbraad.

My research interests are focused on the political anthropology of radical social transformations, particularly in Eurasia and the Caribbean. As a person of Cuban-Russian ancestry, I have experienced the long-term, trans-oceanic effects of the Cuban revolution, the Soviet revolution, and Perestroika. I am particularly interested in how emancipatory revolutions produce unintended dynamics of social asymmetry (including class inequality) and structures of hierarchy, authoritarianism and domination. In my MSc dissertation (LSE, 2008) and a subsequent book about the socio-legal aspects of the anti-slavery revolution in Haiti (1791-1826), I coined the term “transdomination” for this sort of social process.  I also auto-ethnographically investigated the (post)-Soviet diaspora in Cuba, a complex group of barely perceptible ethnicities, which emerged as an outcome of revolutionary policies and transatlantic migratory fluxes during the period of geopolitical alliance between Cuba and the USSR.

My current research topic is the ethnography of transdomination in post-insurrectional and post-Soviet Cuba (from1959 to the present). It encompasses the intersection of three areas of anthropological interest, the: (1) anthropology of revolutions, (2) anthropology of freedom, and (3) anthropology of historical consciousness. Additionally, issues related to geopolitics, 20th-century ideological and strategic models of State socialism, and the modern capitalist world-system are relevant for analyzing post-1959 Cuba.

Such a proposal requires carrying out massive fieldwork –which is exactly the sort of inquiry that ethnographic approaches make possible — and conceptualizing an innovative theoretical framework. I will need to collect ethnographic evidence pertinent for interpreting the complex social reality of present-day Cuba, and to put the resulting accounts in dialogue with life histories narrated by the witnesses and protagonists of the post-1959 revolutionary project. Anthropology is the academic discipline that makes such an integrative approach possible. I chose the University College London (UCL) because its Anthropology Department is deeply engaged with the ontological turn in the research of contemporary revolutions, which conceptualizes their social and cultural dynamics as radical cosmological changes. This kind of theoretical and investigative framework will be crucial for formulating an accurate scientific narrative of the process of transdomination in Cuba.UCL also has a tradition of expertise in both Latin-American and Eastern-European studies, which is an interesting combination for problematizing the issues of State socialism in contemporary Cuba.

My previous research has focused on social asymmetries and ethnography of the habitat in Old Havana and the Guanahacabibes peninsula (Cuba), history of the Cuban anthropology, work cultures of the Cuban emergent economic agents, history of the Cuban legal-constitutional identity, and administrative corruption in Cuba. I earned a Masters in Law, Anthropology and Society with Distinction at the London School of Economics and Political Science, and obtained a Graduate Diploma in Biological Anthropology from the University of Havana. My first degrees are a BSc in Biochemistry and an LLB at the same university. I am currently a member of the Research Workgroup “Anti-Capitalismos & Sociabilidades Emergentes” affiliated with the Latin-American Council for Social Sciences (CLACSO) and one of the coordinators of its Cuban chapter. I worked as an ethnographer at the Instituto Cubano de Antropologia, as a Constitutional Law specialist at the Centre for Law Research of the Cuban Ministry of Justice, and as a molecular biologist at the Centro de Ingenieria Genetica y Biotecnologia in Havana. I lectured in Social Theory, Anthropology, Constitutional Law, History of Cuba and History of Philosophy (inter alia) at the Santa Cruz del Norte Community College of the Universidad Agraria de La Habana.I am deeply committed to the future of Cuba and the development of the anthropological sciences in my homeland. After the completion of my degree, I expect to return and work towards opening new fields of study for Socio-Cultural Anthropology, and to strengthen transdisciplinary research.