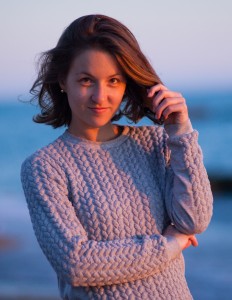 Aleksandra Simonova received her undergraduate education at the European University at St. Petersburg. Thanks to the Wadsworth International Fellowship, she will continue her training with a PhD in social-cultural anthropology at the University of California, Berkeley, supervised by Dr. Alexei Yurchak.

I am interested of social implications of science and technology and development of specific urban environment. I am starting my PhD research on post-Soviet cities of science in Russia at UC Berkeley. These settlements were designed for scientific research in the Soviet Union. I consider anthropological approach to be highly valuable for my research, as the latter involves the analysis of spatial organization and architecture elements, practices of city dwellers and state policies concerning the science cities. These heterogeneous elements can be seen as forming the assemblages that are involved in the making of particular urban spaces. I hope to reveal the factors that pushed the development of science cities in different directions during post-Soviet period.

I have a background in political studies and philosophy from Lomonosov Moscow State University where I got my first degree. In 2012 I entered STRELKA Institute for Media, Architecture and Design one of the most promising schools for architecture and urban studies in Russia. My research was supervised by OMA architectural office of Rem Koolhaas. I explored space utopia and how dreams about space influenced political imaginary as well as material environment in Soviet Union.

Simultaneously I discovered the field of Science and Technology Studies (STS) that also became a promising framework for my research. I entered MA program in sociology at European university where I became a part of a collective research project on Russian computer scientists at home and abroad. In my research I focused on spaces of scientific and technological creativity called hackerspaces. Along with ethnographic research of Russian hackers’ discourses and practices, I analyzed material organization of hackerspaces, global discourse on hackers’ ethics and identity along with the roots of Russian hackers’ movement in the Soviet tradition of scientific and technological creativity.