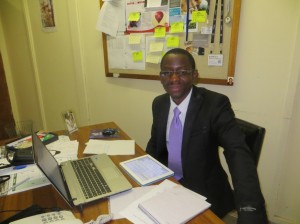 Every year, the Wenner-Gren Foundation awards the Wadsworth African Fellowship to a young African scholar, enabling them to undertake graduate training in anthropology at a world-class institution. This year’s recipient is Njabulo Chipangura of Zimbabwe, who will be commencing studies at South Africa’s University of the Witwatersrand.

I was born in 1984 in Mutare, Zimbabwe. I did my undergraduate honours degree in Archaeology, Cultural Heritage and Museum Studies at Midlands State University in Gweru, Zimbabwe between 2004 and 2008. In September 2009, I joined the National Museums and Monuments of Zimbabwe as a curator in the archaeology department at Mutare Museum. Since then I have been involved in a number of archaeological researches which touches on conservation of all archaeological and historical sites, exhumations, rescue excavations and archaeological impact assessments. In 2011, I was awarded with the National Heritage Council of South Africa Scholarship and the Robben Island Museum Grant to study for a Master’s Degree in Museum and Heritage Studies at the University of the Western Cape.

For my PhD in Anthropology at the University of Witwatersrand, I am interested in understanding artisanal and small scale mining practices (ASM), technologies and processes in Eastern Zimbabwe using ethnographic and archaeological methodologies. The research seeks to pursue the significant lack of knowledge of all aspects of ASM in Eastern Zimbabwe, and the little knowledge of its history. Contemporary ASM activities have identifiable historical continuity with the past. This might be, for instance, include contemporary re-exploitation of nineteenth century or even much earlier mine workings and shafts, and there may be oral traditions or indigenous memory in some form.

The University of the Witwatersrand will be an ideal place for my study because of its reputation as one of the best universities in Africa. Moreso, the anthropology department at the university is a place with renowned scholars who will help me in achieving my own career goals. The diversity of anthropological issues that the department is involved in also places me at a vantage position in terms of learning and gaining new knowledge.