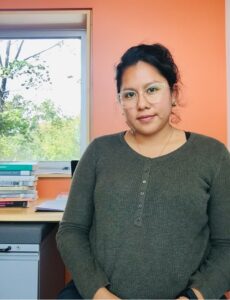 With the support of the Wadsworth International Fellowship Etni Zoe Castell Roldan will continue her training in sociocultural anthropology at Dalhousie University, supervised by Dr.Elizabeth Fitting.

I obtained my BA (2008-2015) in Social Anthropology from Universidad Autónoma del Estado de México (UAEMex) with a thesis that interrogated education, social inequality and class mobility in The Montaña zone of Guerrero, Mexico. Later, I earned a MA in Sociocultural Anthropology (2015-2017) in Benémerita Universidad Autónoma de Puebla (BUAP) with an award winning thesis (Premio San Bernándino de Sahagún INAH 2018) regarding labor and precarity in Mexico’s City meat industry. From 2015 to the present, I have participated in the Power, Class and Culture Research Seminar (Seminario Poder, Clase y Cultura ICSyH-BUAP), where I have developed new interests and advanced my knowledge of themes like political economy in anthropology, commodity production processes and the relationship between class and culture.

My PhD research seeks to engage these critical themes. By analyzing The Seasonal Agricultural Workers Program (SAWP) in Canada, I aim to explore the relationship between the migratory routes of Mexican workers to Canada and the suffering of laborers who harvest and package food commodities. I am interested in focusing on processes of domination and dispossession of vulnerable populations and how they can trigger substantial changes in the migration, diets and foodways in the Global South. I chose Dalhousie’s University PhD program in Social Anthropology because I know that I will receive the training I need to undertake this project by combining critical theory and ethically based fieldwork in a fulfilling, effective way.

After the completion of my degree, I expect to return to Mexico and work towards strengthening Anthropology undergraduate programs and continuing to analyze the political conditions of Latin American workers, in Mexico specifically.