Michael Galaty is Professor and Department Head of Anthropology and Middle Eastern Cultures (AMEC) and Interim Director of the Cobb Institute of Archaeology at Mississippi State University. In 2013 he and Dr. Anastasia Papathanasiou of the Hellenic Ministry of Culture received an International Collaborative Research Grant to aid ‘The Diros Project: Greek-American Collaborative Archaeological Research & Training At Neolithic Alepotrypa Cave’

Tell us a little bit about the project that received Wenner-Gren funding.

For several years, my Greek and American colleagues and I have been working in and around a very large cave located in the Mani, Greece, called Alepotrypa (Fox Hole).  It is one of the largest caves in Greece and housed a Neolithic village, mortuary, and ritual complex prior to its collapse around 3100 BC.  We’ve surveyed the cave’s catchment zone, which encompasses the Bay of Diros, and conducted excavations at a large open-air site called Ksagounaki, located outside of and above the cave, and built with very large “megalithic” stones.  Like many Neolithic villages, the occupants of Ksagounaki buried their dead “intramurally,” i.e. in the village and under house floors.  In 2014, Wenner-Gren helped support additional survey work, including geophysical surveys, in Diros and excavation at Ksagounaki.  Alepotrypa and Ksagounaki are extremely important settlements, since they span various periods of the Neolithic, including the Final Neolithic, or Copper Age, which is very rare in Greece. It was during the Neolithic Age that farming arrived in Greece (circa 6000 BC), allowing increased sedentism and the appearance of village life, laying the groundwork for the later Greek Bronze Age, during which the first states in Europe formed, the so-called Mycenaean states.  In 2014, we also excavated a Mycenaean “ossuary” at Ksagounaki, an unexpected, unique feature, filled with human bone and various grave goods, including a bronze dagger, ivory hair pin, fine pottery, and exotic stone beads.  Because Alepotrypa and Ksagounaki were large, important places, still visible on the landscape 2000 years after their abandonment, we hypothesize that some kind of “cultural memory” drew the Mycenaeans back to Diros, to rebury important dead.

What importance did this project hold for anthropological education in Greece? 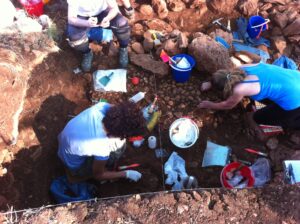 Thanks to the generosity of Wenner-Gren, in 2014 we were joined in the field by Prof. Georgia Phillipakis, from the University of Athens, and four of her students. Greek archaeology is a stand-alone discipline, strongly influenced by history, less so by anthropology and anthropological thinking.  The four University of Athens students who worked with us were given a “crash course” in anthropological archaeology. They worked both in the field and in the lab, with Greek and American faculty and graduate students, all of whom practice an anthropologically-informed brand of archaeology.  Students were given practical training in new survey and excavation methods, including geophysics, excavation, and artifact conservation and analysis.  Several times a week, in the cool of the evening, professors and graduate students would lecture on some aspect of their work with The Diros Project, highlighting both what they were doing and its anthropological significance.  These lectures built theoretical foundations for the methodological training gained by students during the long, hot southern Greek days.  Of her experience, Greek student Effrosyni Roditi wrote: “I would like to thank you all for the opportunity you gave me to participate in this project . I learned so many things in just a few weeks, I met wonderful people and I had a great time. Since this was my first excavation , I would like to say that this project  has  increased my desire to work as an archeologist. It was a unique and memorable experience.”  Our training program for Greek students would not have been possible without the help of the Wenner-Gren Foundation.

What were some challenges that arose during the course of the research, and how did you adapt?

Greece is currently suffering economically.  As a result, the government has slashed funds for archaeology and laid many archaeologists off.  This has made doing archaeology in Greece that much more difficult.  Costs are very high.  We American archaeologists continue to marvel at the tenacity and determination of our Greek colleagues, who are  committed to protecting and studying their cultural heritage, despite the tough times.  The economic and political troubles in Greece have slowed the permitting processes, making planning difficult.  In 2014, we arrived in Greece to begin work and were informed that our permit had been delayed.  Despite the stress this caused, our Greek colleagues sprang into action and our permit was delivered in a matter of days.  Learning to work under conditions of uncertainty took some adapting, but we pulled together as a project, got our permit, and had an incredible research season.

The “embracing” remains have generated quite a bit of press in the non-scholarly world. What are your thoughts on how the popular media has portrayed your findings and their possible implications?

In 2014 we uncovered at Ksagounaki the remains of a couple, a man and woman in their late 20s (based on DNA analysis), who were buried together, embracing.  While prehistoric double and multiple burials are not uncommon in Greece and worldwide, a 5800-year-old “spooning” burial is unique. We do not yet know how they died and exactly why they were buried together, but there must be some kind of personal story, a relationship, that prompted their shared internment.  This story captured the imagination of the popular press and for a few short days in February (the Greek government announced the find on Valentine’s Day), the Diros couple held the web public’s attention. Our opinion is that if archaeologists (and, more generally, anthropologists) are to make a difference in the world, we must do a much better job of accessing social media and shaping the public’s understanding of the human past.  If we do not do so, we cede that territory to those who would distort the past and use it, sometimes with malicious intent.  Finds like that of the Diros couple help us connect with a global public eager to know more about our shared humanity, which is ground in a shared archaeological past.

What are some next steps? What are you working on now?

In 2015 we will spend a month in Athens studying the artifacts collected over the course of five years by The Diros Project and excavated at Ksagounaki.  In the future we hope to continue excavation at Ksagounaki and to extend our survey work outside the immediate hinterland of Alepotrypa.  We assume that those who lived at Ksagounaki used a much wider territory, including the mountains.  Those buried in the cave may have come from distant communities.  And we have no idea where the Mycenaeans who built the Ksagounaki ossuary circa 1200 BC lived.  These questions can be best addressed through expanded regional survey work.