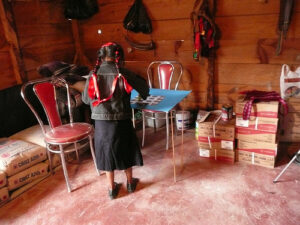 Linda Abarbanell is a Postdoctoral fellow in Education at Harvard. In 2010 she received a Post-PhD research grant from the Wenner-Gren Foundation to aid research on “Spatial Language and Reasoning in Tseltal Mayans”. Recently we reached out to Abarbanell to learn more about her work in Chiapas, Mexico, examining the relationship between language, culture and thought in the area of spatial language and cognition.

Whom or what inspired you in choosing your specific research topic or area?

I’ve always been interested in knowledge – how it’s structured and learned, how concepts develop and change, where they come from. I studied philosophy as an undergraduate, where one of my favorite works was Kant’s Critique of Pure Reason – all about a priori intuitions of space and time. Later, I worked as a fourth grade teacher in New York City, teaching mostly recent immigrant and second-generation children. I became curious about how context, particularly language and culture, interact with different types of knowledge to affect the learning of each child. When I went back to graduate school, I discovered that cognitive and developmental psychologists were finding answers to the questions that philosophers had debated for centuries by studying how infants and children perceive and reason about the world. I started working as a research assistant in a psychology lab at Harvard, helping with a study that was looking at how children learn spatial words – whether they interpret made-up directional terms like ‘ziv’ and ‘kern’ in terms of their own bodies (e.g., left/right) or the environment (e.g., north/south) – going back in a way to Kant. Because of my interest in language and culture, I was drawn to the cross-linguistic work on this topic, looking at how speakers of different languages use different frames of reference to talk about spatial relationships and whether and how this affects their nonlinguistic representations of space. In particular, I was drawn to a series of studies done with the Tseltal Maya of Chiapas, Mexico, by Penelope Brown and Stephen Levinson that argued for rather strong effects of these cross-linguistic differences on speakers’ perception of and reasoning about space.

I decided to go to Chiapas the summer after my first year as a doctoral student to see if I could learn this language and to find out if the claims in the literature were really true. My mentor in the psychology lab, Dr. Peggy Li, had previously worked on this question, prompting English speakers to perform like the Tseltal speakers tested by Brown and Levinson by changing the availability of environmental cues. With her help designing the studies, I collected pilot data on that first trip. I remember boarding the plane the day after testing ten participants, watching the mountains getting smaller and smaller. From that first trip, I fell in love with the region, the language, and fieldwork.

You collected data from informants using a number of “fun games”. How did you design these games and how were they received?

With my collaborators, primarily Peggy Li, we adapted tasks that had previously been used with this and other populations, such as the ones used by Brown and Levinson and colleagues, and also designed new tasks based on other studies of spatial reasoning. We’re testing things like memory for small-scale spatial arrays, mental rotation, and navigation, which adapt well to a game-like format. So we do things like arrange toy animals in a pattern, and ask participants to arrange the animals in the same way after moving to a new location and turning to face a different direction. Or we hide a coin in an array while the participant watches, blindfold the participant and rotate the array, then remove the blindfold and ask the participant to find the coin. The games are challenging enough to engage people, but also relatively easy and short so they can be used with children and adults, and with individuals that are less familiar with school-like tasks. Sometimes the tasks are too hard the first time I try them, or the directions are unclear. Designing is always a process of piloting, reviewing and revising. Once I collect reliable data on a particular task, the next step is to analyze it and figure out what to manipulate to address the next question that comes out of the results. I always work with a research assistant that is a native speaker of Tseltal and lives in the community – a woman I have worked with for several years. We go through the instructions and translations carefully and test everything out on family members first. I value her input greatly. I can’t speak for the participants, but I think they enjoy the games and like participating. It is something different and fun and doesn’t take up too much time. At this point, most people where I work know me and will sometimes ask if I am working on something they can participate in.

What was a major obstacle that you encountered in the course of your research? 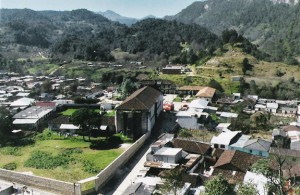 How did you adapt?

The biggest challenge, but also one of the greatest areas of interest, has been dealing with cultural and language change, and worrying about how my studies might be affecting the population with respect to the phenomenon that I am trying to study. Almost all children now attend school where they acquire Spanish, which uses an egocentric system (e.g., left/right). They also learn to read and write, where left-to-right and up-to-down orientations are important. And each year I see more and more infiltration of Western media and culture, particularly in the municipal center. You also see more and more migration of younger people to urban areas within Mexico and to the US for work. Many return to their community and families after saving money for several years. It would be inaccurate to portray these as static cultures or languages, cut off from the rest of mainstream Mexican society and the world. My data show that younger bilingual speakers who have attended secondary or high school use a combination of both left/right terms, generally in Spanish, along with geocentric directional terms in Tseltal, depending on the constraints of the task and who they are talking to. Younger children who have not yet acquired the use of a left/right system and older adults with lower levels of schooling who do not generally use a left/right system, provide stronger contrasts with speakers of languages like English, but it is still not clear cut. It is hard to know just how much exposure to Spanish and other cultural and environmental artifacts would be predicted to have an effect on patterns of spatial reasoning. It’s also a concern, where there is a limited participant pool, that participants who have been in multiple studies have been exposed to, or even taught the use of a left/right reference system though all the studies that they’ve done. They are also no longer naïve participants, but may think that I am looking for a particular response where I am not.

There is no easy way to deal with these issues, which are research questions in themselves. I always collect background information on the participants, including their educational level, knowledge of Spanish and literacy skills, and I try to conduct as many comparisons as I can, working with different demographic subgroups within the same general population and geographic region. They aren’t clean comparisons since many factors covary, but they do provide a snapshot of the range of individual variation in the population at this particular point in time.

The notion that language is deeply connected to thought is, as you recognize, the subject of heated discourse in both academic and popular science. What do you think is at stake, politically, in the tension between universals and particulars?

The region where I work is fraught with political tensions and divisions. As a researcher, I try to understand what is, rather than taking a position on what ought to be, but of course, the question of the relationship between universals and particulars is extremely political – or rather, can very easily be co-opted towards political ends. It cuts right to the question of how different groups of people differ as a result of the very things that define them as a group. In addition to the question of translatability and whether there can be true communication and understanding across groups, it’s a slippery slope to the question of whether one system or way of conceptualizing the world is in some way better or more optimal than another. Are speakers at a cognitive disadvantage if they have fewer number words in their language, or because they have no way of expressing “to the left of the tree”? Do such speakers not develop the same capacity to reason about large quantities or to remember where things are from the perspective of an independent viewer? Do mature speakers lose the flexibility to acquire categories and concepts that are not encoded in their language? While innocent in itself, taken to an extreme, the argument that we are locked into how our language and culture conceptualize the world can be used to deepen divisions and further oppress already marginalized groups.

In the region where I work, indigenous children were at one time prohibited from and punished for speaking in their native language at school. Today, individuals may be reluctant to admit they speak an indigenous language after moving to an urban or mestizo region. In the community where I work, parents have expressed that the monolingual schools (where the teachers speak only Spanish) are better than the bilingual ones since their children acquire Spanish more quickly. They know that Spanish is the language of currency if their children are to further their education and advance in the mainstream Mexican economy. Identifying indigenous and minority languages as a barrier to acquiring more Western concepts might further contribute to their devaluation and ultimate loss. On the other hand, we can focus on the range of possibility that different languages and cultures afford, the strengths and advantages of each system as a unique solution to an environmental and communicative problem, and find arguments for maintaining linguistic and cultural diversity, particularly if we take these differences to result in flexible shapings at the margins of a largely shared conceptual core. I prefer to avoid such discussions, both for the sake of remaining true to the scientific process and also because I believe the question of cultural rights is separate from the market value of any particular language or cultural practice. It does concern me, however, that the academic debate in this area has tended to be so polarizing, and in the process, to polarize certain languages and cultures by perhaps overemphasizing differences while overlooking similarities.

Are you a current or past grantee and want to be featured in a mini-interview on our blog? Contact Daniel (dsalas@wennergren.org) to find out more.