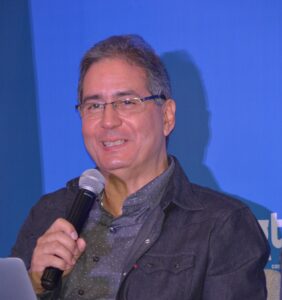 Wenner-Gren is proud to share the news that the American Anthropological Association has selected Dr. Gustavo Lins Ribeiro as this year’s recipient of the Franz Boas Award for Exemplary Service to Anthropology. Gustavo Lins Ribeiro was the founder in 2004 and first chair of the World Council of Anthropological Associations (WCAA). He currently lives in Mexico where he is a full professor at the Universidad Autónoma Metropolitana and a Level 3 National Researcher of the National Council of Science and Technology (CONACYT). He is professor emeritus of the University of Brasilia, where he worked from 1988 to 2014, and an Honorary Member of the International Union of Anthropological and Ethnological Sciences. Dr. Lins Ribeiro also received a Wenner-Gren Wadsworth Fellowship in the 1980s and was a member of the Foundation’s Advisory Council in the 1990s.

This honor is given to “members whose careers demonstrate extraordinary achievements that have well served the anthropological profession.”

Dr. Lins Ribeiro’s scholarship, research, and service have demonstrated an outstanding application of anthropological knowledge toward improving the human condition throughout his expansive career. His areas of research encompass issues of transnationalism, international migrations, and changing trends in computer-mediated communicative practices. A prolific scholar, he has contributed extensively to AAA publications in Portuguese, Spanish, and English. To date, Dr. Lins Ribeiro has authored or edited more than twenty-seven books. He has published over 130 articles in numerous journals including American Anthropologist, American Ethnologist, Annual Review of Anthropology, Critique of Anthropology, Current Anthropology, and Journal des Anthropologues.

Wenner-Gren at the AAA’s