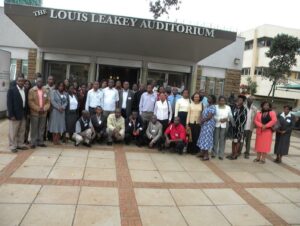 Dr. Frederick Manthi is senior research scientist and head of the paleontology division of the Department of Earth Sciences at the National Museums of Kenya. He has been involved with the Wenner-Gren foundation since 2006, completing several post-PhD research grants aiding investigation of Pleistocene-era Kenya. Beginning in 2007, Dr. Manthi has conducted a series of Human Evolution Workshops in his country with the intent of arming high school teachers with the proper tools to teach human evolution effectively in their schools.

Why did you feel that it was important to hold your Human Evolution Workshops?

Teaching of prehistory and evolution in Kenya is a major challenge encountered by all educators, including curriculum developers. This is because most Kenyans are very religious and hold their religious beliefs very intimately. Because of this, most of the teachers of prehistory and human evolution lack the passion to do this, as they view this as a challenge to their religious teachings. The Prehistory Club workshops sponsored by the Wenner-Gren Foundation attempt to bridge the perceived gap between religion (creation) and the scientific evidence of evolution. The workshops demonstrate to teachers that it is not only humans that evolved, but all biological species (from a simple to complex form). We demonstrate to the teachers that humans have witnessed tremendous biological and cultural changes over the passage of time, and that we are a product of a long evolutionary process which today is evidenced largely by cultural innovations.

How were the workshops received? What sort of feedback did you receive?

The workshops have been received with great interest and enthusiasm, as they help the teachers understand/appreciate evolution as a natural process, which may also be explained by numerous teachings in the Bible. The workshops help to provide answers to the many questions that the learners/students ask the teachers, such as ‘are we still evolving?’  The feedback we get is that ‘we should hold more of such workshops’ as they help defuse the conflict between religion (creation) and the scientific evidence on the emergence/evolution of species, particularly humans.

Have there been any noticeable changes to the teaching curriculum?

Yes, we are seeing curriculum developers consult with scientists at the National Museums of Kenya as they review the syllabus. This is very positive. In fact, there is a substantial number of teachers who work very closely with the Prehistory Club, and who engage their fellow teachers in discussions aimed at making the teaching of prehistory and evolution more easier and interesting.

What do you see in the future for human evolution education in Kenya?

I believe the future for human evolution education in Kenya is very bright. We are seeing more young Kenyans take careers in paleontology/palaeoanthropology and archaeology at the graduate level. We are seeing a lot of enthusiasm among the teachers and students alike at the high school level. This is very positive, and promises a bright future.