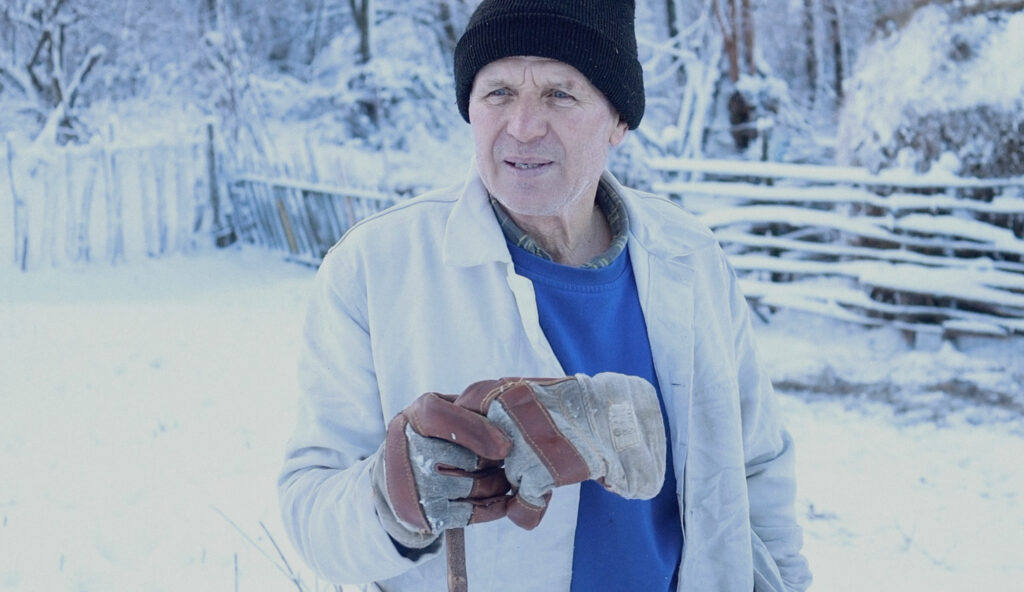 Apr 27, 2022
Upon receiving a Fejos Postdoctoral Fellowship in Ethnographic Film in 2020 Larisa Jasarevic was able to pursue working on her film, “Beekeeping in the End Times”. We are thrilled to be able to share the following trailer and blogpost.

At the closure of the Fejos Postdoctoral Fellowship in Ethnographic Film, awarded to the “Beekeeping in the End Times” for 2021, I can report a number of accomplishments, a frank uncertainty about the film’s future course, and a deep appreciation for the grant itself.

Fejos Fellowship was a phenomenal opportunity. Wenner-Gren Foundation and its reviewers gave a chance to the project that, in retrospective, was rather bold to propose. The trust bestowed, as well as the generous funds, have gotten me fully engaged in all aspects of the filmmaking process, from shooting and script writing, to producing and editing. Moreover, the grant has also launched two co-directors–and sisters, Larisa and Azra Jasarevic–both first-time feature directors, into a fulltime filmmaking venture. By the end of the year, we have a small, independent studio established in our village home (by the apiary), a trusted crew, the first cut ready, and a number of plans for the rest of the post-production and distribution process. Just as importantly, we have developed a network of the film’s friends, in and out of the film industry, which vitally connects our budding and local storytelling enterprise to film workers and connoisseurs, worldwide, as well as to academics whose impressions and advice, we hope, we’ll guide us onwards.

In what follows, I will 1) reflect briefly on the production process, including several adjustments made to the original proposal, then 2) will give a digest of the first-cut, and 3) will summarize the near future plans and, indeed, hopes.

The film’s production lasted from January through October of 2021. We started by reviewing the archived footage and drafting tentative scripts for the three main stories the film intended to depict. However, in March, when the reported number of COVID infections subsided in the region and the regulations on social distancing eased, we decided to go into a full filming mode. For several reasons. First, the field footage was shot with three different cameras and, often, too rushed to make a coherent (let alone compelling) aesthetic impression on the viewers. Second, the local ecologies were changing so dramatically over the last few years that we wanted footage to focus, more explicitly, on several emerging patterns. Third, the principle field collaborator, whom we imagined as the storyteller whose voice and presence would pull together the film’s two strands—the honeybee climate change ecology and Sufi eschatology—has passed away from a Covid infection, just weeks after the grant had been awarded. Heartbroken, we grappled with the loss the way anthropologists (and filmmakers, apparently) often handle existential issues and crises: we invested into our work. What followed was a full-fledged, intense, well-travelled, field shooting schedule that took us cross-country. We have filmed eight beekeepers and three shepherds at 32 locations in the mountainous, riverine, and Mediterranean sub-climates of Bosnia and Herzegovina. Inclusive of the vignettes shot at our village apiary, we have amassed 72 hours of footage. In the process, I also took photography and film camera classes as it soon became obvious that great and fleeting filming opportunities will not oblige our shooting schedules, made in advance, nor wait for the principle camerawoman, Azra, to be at hand. This investment paid off tremendously, I think. (The first scene in the teaser, for instance, of a honey harvest, shows just how a camera novice, like myself, armed with patience and willing to experiment, can “luck out.” The light I discovered and captured that August afternoon, in the attic, while bottling honey, has never quite repeated itself).

72 hours of footage is an accomplishment but also a liability in post-production. Predictably, we were overwhelmed and had hard decisions to make while drafting a post-production script. Luckily, we began reviewing and cataloguing materials in September, as soon as the major honey forage sites began closing off. By December of 2021, we have made an assembly cut. At the same time, we found a great local musician, Mirza Redzepagic (https://www.mirzaredzepagic.com) to write the film’s score. The original project proposal counted on a local Sufi dervish musician to write music for the film but some extenuating circumstances have made this arrangement infeasible. The turn of the events was, ultimately, for the better. Mirza’s performance scope is much wider, he runs an independent studio, which made score production much easier to conduct, and his intuition proved vital for depicting the eschatological and spiritual mood we envisioned. Hiring Mirza entailed reshuffling our original budget allocations, but Azra and I decided that the music was an integral part of the film. As a result, we are hoping to secure additional funds for sound editing and color correction, sometime later in the process. We have spent many days in Mirza’s studio since, producing music, scene-by-scene. Our first trial in collaboration was the teaser, followed by a 11-minute video, drawing on the film’s footage, which we presented as a part of a keynote for an academic conference (see https://beekeepingintheendtimes.com/The-Film). Finally, we produced the score for the first cut.

All along, I have been exploring various options for linking up with producers, production houses, and distributors in and out the region. Many trials, indeed, dead-ended. Getting a foot into the industry must be a challenge for all first-time filmmakers. After the assembly cut was finished, it became obvious that producing three stand-alone stories, as originally proposed, was not as doable (nor as desirable) as it initially seemed. It was already difficult enough to convey the rich blend of diverse themes in 90 minutes. The film is still framed by three Islamic stories, but the first story now functions as an introduction to the main themes and concerns that recur throughout the film. I am determined to try out a hand in short films in the near future, but this unruly first project, I feel, holds best as a whole. In addition, we are still hoping to develop the film’s festival route, which means that the film would not be made available online until after it has travelled to international showrooms. After public screenings, we are committed to making Beekeeping in the End Times available on the basis of free access, on our website.

With the first cut ready, we are holding our breath for the comments and impression of the handful of first viewers we have secured. Among them are producers, directors, anthropologists, journalists, and humanities scholars. We expect the comments to help us move onwards: decide how to revise, what form and scale of an outreach to plan, and, possibly, what sorts of affiliations to seek out with film institutes, producers, and distributors.

The first cut, in other words, was a hard-won achievement but it also feels as if we have stepped out onto a threshold. Only now we may know what is the potential of the story we have (or could) make. Can it travel internationally? Might the film be fit for the festivals or is it, rather, more suitable for a more modest but, nonetheless, public broadcast, including on our web page.

In this report, I am bracketing some very substantive concerns and questions we have about our storyline, about the portrayal of the characters, and, indeed, about the “end times” atmosphere we’re depicting. Suffice to say that, I suspect, much work remains to be done if the film is to shape up and travel well. I plan on applying for additional film funds in order to secure financing for the remainder of the post-production and distribution process. I have been awarded a fellowship for 2022 with the Independent Social Research Foundation (ISFR) and an affiliation with Max Planck Institute for the History of Science in Berlin. These awards will not only sustain me as an independent academic but will also ensure that our village studio is up and running and that the film is enjoying our full attention through the end of the year. While the film’s future is being worked out, I will take the news of its making on the road. Giving talks on the subject of the research project itself (the book by the same title is due to be published by IUP in the Fall of 2023) and showing film excerpts, I will carry on telling the story about the bees weathering the treacherous times on our planet.