Another grantee returns from their Engaged Anthropology Grant, with a report from Jessica Robbins of the University of Michigan!

“Beyond ‘Active’ Aging and Abandonment: Relations of Suffering, Care, and Hope in Postsocialist Poland” 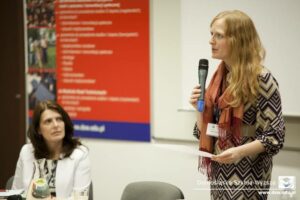 On May 15-16, 2013, the University of Lower Silesia in Wrocław hosted two workshops funded by the Wenner-Gren Engaged Anthropology Grant awarded to Jessica Robbins. The workshops were based on Robbins’s doctoral research on aging in Poland, which found that experiences and ideals of aging in Poland are characterized by discursive and institutional contrasts between modern, progressive, and “active” older adults, and supposedly “backwards,” suffering, and abandoned elders in institutional care. Based on ethnographic findings that processes of relatedness provide other possibilities for moral personhood in old age, the workshops tried to avoid common practical and scholarly binary distinctions of in/dependence, East/West, and socialism/capitalism, and instead to forge connections among practitioners and scholars.

In the first workshop, entitled “Beyond Old Age: Development, Change, and Support,” a diverse and energetic group of scholars, professionals, and older Poles themselves discussed experiential and structural dimensions of growing old in Poland. Among the seventy-two participants were scholars of pedagogy, gerontology, psychiatry, psychology, and sociology; professionals in medical, educational, social work, caregiving, policy, and artistic fields; and older people who participate in Universities of the Third Age and other organizations specifically for older adults. Co-organized by Professor Elżbieta Siarkiewicz and Dr. Joanna Minta, the workshop began with opening talks given by the President of the University of Lower Silesia, Professor Robert Kwaśnica, Professors Mirosława Nowak-Dziemianowicz and Adam Zych, and Jessica Robbins. The remainder of the day was divided into three panel presentations followed by open discussion. Panelists on each of the three panels – Development, Change, and Support – approached the topic from their own particular experiential and professional position, thereby creating a broader understanding of these topics than suggested by any one discipline or experience alone. 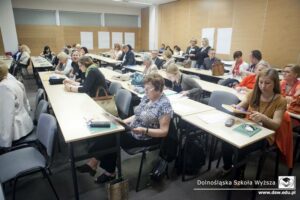 During the energetic discussions that followed each panel, common themes emerged: the importance of education in late life; the need for physical, mental, social, and spiritual development in old age; the need for better social, medical, and educational resources for older people in Poland; the value of intergenerational relations; and the marginalization of certain populations of older people from programs focusing on activity in old age. During the coffee breaks and lunch, panelists and workshop participants had the opportunity to meet people with shared professional and personal interests in aging. During follow-up conversations, Robbins found that people who met at the workshop are already planning future collaborations. Along with a confirmation of the desire for more such interdisciplinary and creatively-structured events, a major finding of this workshop is that continued efforts must be made to include the most marginalized groups of older people in such discussions. As one workshop participant noted, the many organizations and institutions that help older people to become more integrated into society are very good at hoping those who want to be helped; however, discussions of programs like intergenerational theater do not provide much help to people such as former prisoners or the homeless elderly, who continue to face social exclusion and discrimination. 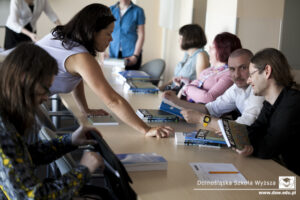 In the second workshop, entitled “Beyond Socialism and Postsocialism: Contemporary Ethnographic Perspectives on Central/Eastern Europe,” eight scholars came together for a discussion of current topical and theoretical trends and debates in anthropological studies of central Europe. Co-organized by Hana Červinková, Director of the International Institute for the Study of Culture and Education, and Associate Dean for International Education and Research at the University of Lower Silesia, and faculty at the Institute of Ethnology of the Czech Academy of Sciences, and Michał Buchowski, Director of the Institute of Ethnology and Cultural Anthropology at Adam Mickiewicz University, the workshop brought together doctoral students and faculty from Polish and Czech universities—the University of Lower Silesia (Wrocław), the University of Wrocław, Adam Mickiewicz University (Poznań), the University of Łódź, Charles University (Prague), and the Institute of Ethnology of the Academy of Sciences of the Czech Republic—who had lively discussions on the state of anthropological studies in the region based on their own ethnographic, anthropological, and historical research.

The interdisciplinary group included scholars of anthropology, education, and history who gave short presentations on a wide range of topics: gender, disability, kinship, medical anthropology, aging, nationalism, identity, ethnicity, education, and engaged anthropology. Despite these varying topics, the scholars found common ground in their discussions of personhood, memory, activism, inequality, orientalism, essentialism, phenomenology, methodology, and the anthropology of Eastern/Central Europe. Even though not all scholars found the categories of socialism and postsocialism useful, all felt the need to respond to these categories in some way, pointing to the ongoing role of these categories as disciplining structures for the region. As a result of this workshop, scholars will develop their presentations into articles to be published in a forthcoming issue of Cargo, the journal of the Czech Association for Social Anthropology.