Jessica Barnes is Assistant Professor in the Department of Geography and Environment & Sustainability at the University of South Carolina. In 2007, while a doctoral candidate at Columbia University, she received a Dissertation Fieldwork Grant to aid research on ‘Farming Fayoum: The Flows and Frictions of Irrigation in Egypt,’ supervised by Dr. Paige West. We welcome her to the blog to share her experiences working with our Engaged Anthropology Grant and returning to the field to share her insights with the community.

Over the past years, I have become increasingly comfortable talking about my work in academic contexts. Presentations at the AAA meetings no longer scare me, talks to other colleagues are fun rather than alarming, lectures to undergraduates are not a cause of anxiety. I feel a sense of belonging in the academic world. It is a familiar cultural space in which people “think through” ideas, “work with” certain theorists, say “right?” a lot, and do a funny rotating motion with the thumb and forefinger of one hand as they talk. In my research site within Egypt, I feel a different sense of belonging. I am comfortable walking through the fields with farmers who I have known for years, talking with irrigation engineers, meeting with government officials in the water ministry, and hanging out with international consultants who run water projects. Yet giving a formal presentation about my ethnographic research in these spaces? To be honest, the thought initially terrified me. Would anyone find it interesting? Would it seem abstract and irrelevant? Would it be politically sensitive? Thanks to the Wenner-Gren Engaged Anthropology Grant, I had the opportunity and encouragement this summer to step outside of my comfort zone and bring the results of my academic research to my fieldwork site. It ended up being an incredibly rewarding and enjoyable experience. 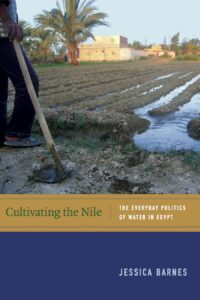 During my doctoral fieldwork in Egypt, in 2007-8, I conducted ethnographic research on water with farmers, irrigation engineers, government officials, and international donors in Fayoum Province and Cairo. This work culminated in a book, Cultivating the Nile: The Everyday Politics of Water in Egypt (Duke University Press, September 2014). In the book, I argue that Egypt’s water is not a given object of management, but rather, is made as a resource by day-to-day practices that take place across multiple scales. Some of the most active political contestation around water, I propose, occurs not in the realm of international treaty negotiations and large dam projects that has received so much attention in the literature, but rather, around these everyday practices of making the resource in quantity and quality, space and time.

In my engagement project, which I conducted in May-June 2014, my goal was to share the results of my work with people in Egypt who have an interest in the Nile, and to open up some spaces for discussion. Arriving in the midst of the presidential election, it was a fascinating time to be in Egypt. The “CC” graffiti all around Cairo and Fayoum by the time I left reflected the optimism of many about the newly elected President Sisi, but also, the marginalization of many others. While people’s political positions seemed to be deeply divided, a constant refrain I heard was concerns about poverty, livelihoods, and governance of the nation’s resources – issues that my work, with its focus on one of Egypt’s most fundamental resources, speaks to.

I gave my first presentation in Fayoum Province to a group of 20 farmers. I started my talk by explaining that what led me to this research topic was an observation that much of the literature on the Nile gives scant consideration to farmers, even though it is farmers who use 90% of the river’s water. In my opinion, to understand more about what is happening to the water of the Nile, we have to look to the sites where water is actually being used on a day-to-day basis. This idea resonated with those present, who are well aware that they are often marginalized when it comes to water management debates. We had a lively discussion about the practices of farm-level water management that I discuss in the book. I also talked about some of water management practices that are taking place at other scales, which most farmers are not so familiar with. For example, I explained how in times of high Nile flows, when the Lake Nasser reservoir gets too full, the Ministry of Water uses a spillway to divert water into the desert. The evaporation of this water from the desert is a powerful illustration of the irony that while many farmers face water scarcity, in some parts of Egypt the problem is actually one of excess.

I gave my next two talks in Cairo. The first was hosted by the Water Institute for the Nile and Nahdet el-Mahrousa; the second by the Research Institute for a Sustainable Environment at the American University of Cairo. Each event attracted audiences of around 30 people, comprising Egyptian and international researchers, development practitioners, journalists, irrigation engineers, activists, civil society representatives, academics, government officials, and students. Many of these people work on water-related topics and are familiar with Nile issues. Being based in Cairo, however, most of them only have a limited knowledge about the day-to-day practices of water management along canals and in the fields. This was the part of my work that I think they found especially interesting. Many were also unfamiliar with ethnographic research and were struck by my different approach to looking at these issues. My argument that charging farmers for irrigation water and educating farmers are not the best approaches for dealing with water scarcity sparked particularly heated discussion.

Overall, this was a valuable challenge for me to think about the parts of my work that might be relevant to non-anthropologists. I was pleasantly surprised at the interest people expressed and at the vibrancy of the discussions that my work generated – discussions from which I learned a great deal. The engagement project inspired me to continue these sorts of interactions as I move forward in my next ethnographic study of food security, wheat, and bread in Egypt.