Engaged Anthropology Grant: Isabel Scarborough and “Raising Awareness on the Importance of the Informal Market in Cochabamba, Bolivia”

Isabel Scarborough is Assistant Professor of Anthropology at Parkland College and Research Affiliate at the Anthropology Department of the University of Illinois at Urbana-Champaign. In 2007, while a doctoral candidate at the University of Illinois, she received a Dissertation Fieldwork Grant from the Wenner-Gren Foundation to aid research on ‘Market Women Mothers and Daughters: Politics and Mobility in the New Bolivia,’ supervised by Dr. Andrew Orta. In 2012, she received the Engaged Anthropology Grant to return to her fieldsite in Cochabamba, Bolivia to conduct a three-day workshop and produce a children’s book based on her research on the country’s informal markets.

This summer I traveled to my fieldsite in Cochabamba, Bolivia, where I had studied how indigenous informal market women in this city incorporate themselves into the global market. In my research, I was particularly interested in the contrast between the older generation of merchants who were barely literate and still marked their indigeneity through their dress and language, and their daughters who—now in their late twenties—had acquired a college degree before returning to informal vending. Why were these young women willing to go back to informal vending when they now had the credentials to get jobs in formal businesses? Many fellow anthropologists have discovered in the course of their ethnographic work in Africa, Asia, and Latin America that the informal market is turning into the largest form of employment in the developing world. Cochabamba is no exception to this trend and, indeed, shows the informal market taking over regional and international trade in addition to moving the economy of this city of over 700,000 people. The young market women of my study chose to continue working in their mother’s trade, despite their education, precisely because of this growth and the economic benefits brought by this line of work. However, notwithstanding these financial incentives, informal market women also perceived a continued marginalization of their actions given their historically-subordinate identities as both female and indigenous. Over eighteen months of fieldwork I held many conversations with market women of both generations who keenly felt that Bolivians misunderstood how their trading activities contributed to the region’s economy. Because of this, I wanted to raise awareness in Cochabamba on the significance of the informal market; the purpose of my Engaged Anthropology Grant. 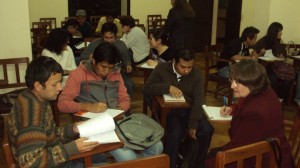 My approach to this project targeted two distinct populations; the local academic and professional community that studies the informal market in Cochabamba, and the urban lower and working classes of which the market women are a part.  I worked with colleagues at the graduate school of the local state university, CESU – Universidad Mayor de San Simón, to put together a workshop for the first group. The Wenner-Gren Foundation sponsored a two-day seminar in which participants who included undergraduates and professionals—some of whose families worked in the informal sector—read and discussed ethnographic work on the informal market and the importance of market women. These readings included my own published work on the Cochabamba market, which I translated into Spanish for the workshop participants. A copy of this translated article that is based on one my dissertation chapters will be published in the next issue of the social sciences academic journal of this university, Decursos. In addition, some of the participants in the workshop and I will collaborate on two future articles for this journal that will combine our data on the informal market in this city. This continued exchange of ideas and information contributes to the second aim of this workshop which was to strengthen the links between US and Bolivian academia.

A second activity in my efforts to raise awareness on the work of informal market vendors involved the design, writing, and publishing of a children’s storybook. This idea was inspired by my conversations with the market women who show unstinting dedication to their children’s education, many of whom I often observed supervising their little one’s as they did homework among their mother’s market stalls, or working longer hours in order to send their sons and daughters to private schools at great sacrifice. The market women had often pointed out the dearth of good reading materials for their children, and mused on how few if any of the storybooks they saw had any stories about families in trade. Teaming up with renowned Bolivian author Gaby Vallejo, we put together a book that tells the story of a young boy, son of a market woman, and his perceptions of his mother on the day on which he will leave her to immigrate to Spain where his father and other family members work and reside. The book, titled, Tomasa Quispe en los ojos de Felipe, (“Tomasa Quispe through the eyes of Felipe”) shows Felipe’s journey through the marketplace where he notes many of the commercial activities that take place, the hard work of the women at the vending stalls, the family life in the passageways between stalls, and his sorrow and that of his mother at their imminent separation. 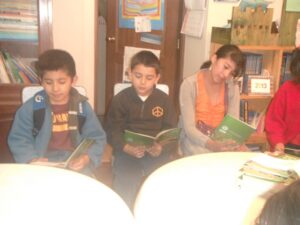 The book’s edition, financed by Wenner-Gren, was published in Cochabamba and is illustrated with pictures from the marketplace juxtaposed with drawings of Felipe and his mother, Tomasa. After its distribution in the markets, the publication was presented to the non-profit children’s library Thuruchapitas for its dissemination and distribution. The book will be donated to public schools in Cochabamba and given out as prizes at reading contests and workshops throughout the city. During my stay in Cochabamba, I also organized a reading of the text with school children, many of whose mothers were market vendors, with some of Thuruchapitas’ volunteer teachers.  The children who attended the reading all received a copy of the storybook, as will any other children who participate in the library’s weekly readings over the next few months.

I hope that, in some small way, these two activities meant to raise awareness of the importance of the informal market return the generosity of the market women who made me welcome and collaborated on my doctoral dissertation work. I am excited to return to my fieldsite in future and continue engaging with these women whose experiences have much to teach us about Bolivia’s changing socioeconomic structures.