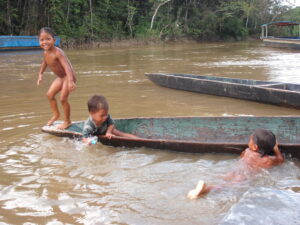 Douglas London is Assistant Professor of Medical Anthropology at Adelphi University. In 2009, while a doctoral candidate at Arizona State University, he received a Dissertation Fieldwork Grant to aid research on ‘Hunter-Gatherers and Dietary Double-Edged Swords: Food as Medicine among the Waorani Foragers of Amazonian Ecuador,’ supervised by Dr. Takeyuki Tsuda. In 2013, he was awarded the Engaged Anthropology Grant to follow-up on his research with two Ecuadorian indigenous groups and the complex interactions linking their diet, health, and local economic activities.

I.The Problem: The study, started in 2009, compared the diet and the health of the Kawymeno group of Waorani hunter-gatherer population still engaged in full-time foraging outside the modern food system with neighboring subsistence agricultural indigenous rain forest populations. The study focused on the pharmaceutical aspects (plant phytochemical content of their diet) rather than the nutritional aspects of their diet. There were major differences in health outcomes across the board; most of the infectious and chronic diseases present in neighboring indigenous farmers were completely absent among the Waorani hunter-gatherers. When confounding factors are controlled for study evidence demonstrated that particular aspects of the Waorani traditional diet protect against certain chronic and infectious diseases. Waorani that have abandoned their traditional diet now experience these dietary related diseases. Maintaining a traditional high dietary phytochemical intake has been discouraged by policies of oil companies, non-profits, government health and education institutions and Westernizing Waorani institutions themselves. However, many phytochemical-rich foods, such as rain forest fruit varieties, still exist near the Waorani but are just simply ignored in favor of processed and imported food. Unfortunately, westernizing Waorani are encouraged through example by their new Western role models, to discontinue their supposedly “primitive” diet. Informal dietary advice and food given to the Waorani by local Ecuadorians negatively affects health outcomes. This underlines the importance of making those institutions who provide dietary advice and food aid aware of the particular characteristics and striking health benefits of the native Waorani diet that is high in wild varied phytochemical and nutrient content that is lacking in a Western diet. Waorani are losing their foraging lifestyle due to the intrusion of oil companies and oil drilling in their rain forest homeland in previously protected Yasuni National Park.

Implementation: We were given a Wenner-Gren grant to disseminate study results with the overall goal of returning in person to the study site to start an ongoing dialogue with the Waorani, as well as Ecuadorian regional influencers and stakeholders in that region of the Amazon rain forest, regarding preservation of the tradition food system of the Waorani. Maintaining a traditional diet has been discouraged by policies of oil companies, non-profits, government health and education institutions and Westernizing Waorani institutions themselves. The Ecuadorian government has very recently giving the green flag to begin oil drilling in Yasuni national park one of the most bio-diverse regions of the world and our study site, a blow to global conservation efforts. However, armed with a small budget we wanted to make the oil companies, as much as possible, a part of the solution as oil companies officials pay for many Waorani schools, teachers, health clinics and health providers and provide limited food and employment while drilling. We had already participated in negotiations between the oil companies and the Waorani nation as a whole and through this process built up some trust with the overall Waorani population as a whole beyond our small Kawymeno community we focused our research on.

Regional visits and meetings took place in 32 remote Waorani communities, and attendant schools and health centers, as well as with local and national officials who oversee these regions. For almost two months study results were disseminated to remote Waorani communities and people most influential in affecting Waorani dietary decisions: oil companies, non-profits, indigenous representative groups, health and education providers and government officials. The goal was to encourage the preservation and recognize the value of the native Waorani diet. This also meant measures to provide continued access to the rain forest where the native food comes from. The practical emphasis of the meetings was on planting the seeds of potential future collaborations and projects with multiple stakeholder participation. Our regional “workshops” used food demonstrations, role-playing/theater, and a brief PowerPoint show where possible. In general we avoided lecturing as a medium as it is not effective with foraging communities and has less impact than more dynamic approaches for other stakeholders as well. We often had to perform on the spot with no preparation time. Our Waorani assistants and promotors often accompanied us

All these regional meetings disseminating study results and discussing the value of the Waorani native diet culminated in a conference to which both indigenous leaders and Amazonian regional and national influencers and stakeholders were invited. We set a tentative date early on during these regional meetings for a final conference to bring all the people we talked to together to form a blueprint as to how each stakeholder might participate in preserving and promoting the native Waorani diet. The conference took place in the regional capital Coca in the Hotel Auca, a hotel named after an earlier name given to the Waorani and generally sympathetic to Waorani concerns. Many indigenous leaders and regional educators, health providers, oil company and government officials, academics, non-profits and other stakeholders came.

Our goals were first to create awareness of the value of the Waorani food system and culturally appropriate ways to preserve the Waorani food system, second to generate respect for the Waorani culture via the food system and promote Waorani pride in their native diet, third to plant the seeds for future collaborations among the stakeholders to preserve the native Waorani diet. We felt we did create awareness of the value of the Waorani food system where there was previously little understanding or interest in the native diet. We also made some headway with arranging collaborative for future projects through bringing together stakeholders that rarely meet on the issue of food system preservation. Stakeholders we contacted are now more aware of the health value of the Waorani diet where before it was not considered an important issue. In reality we needed more time, money and a longer more permanent presence to make lasting change to avert the destruction of the food system that is occurring. Beyond this grant lifespan we plan to continue research, dissemination and building relationships in this Amazonian region of Ecuador

Conclusion: Wenner-Gren funds anthropological projects that go beyond studying the indigenous group and get to what matters in real life, making use of what is learned in way that really helps the people studied. An academic product discussing the lessons learned from the study returned in a written form to indigenous leaders and stake holders is a culturally inappropriate vehicle to create positive change in the local region. While benefiting the anthropologist this method of research dissemination often has no immediate useful impact on the actual indigenous participants in the study. Wenner-Gren engagement grants go the next step and give back something tangible to the indigenous participants who so generously give time to the researchers. It is hoped that more researchers will dedicate time to giving to as well as receiving from their indigenous partners and Wenner-Gren will continue to be a leader in making anthropology more relevant to the real world problems and issues.

Bottom Line: We personally feel for anthropologists to fare well in what is a changing world and appear relevant to our audiences and supporters at home and abroad we must move with the times and practice more community development along with research. We are grateful Wenner-Gren is taking a leadership role and hope more funding will be available for community development component of research. Anthropologists will move with the times to go beyond being “activists” to becoming implementer of the things we hold dear such as the preservation of global human diversity. Paid to work closely with indigenous groups we have a unique opportunity to make a difference. Our upcoming article funded by Wenner-Gren describes a pilot methodology we hope is useful in helping other anthropologists to become implementers in the preservation of diversity.