Pnina Werbner is Professor Emerita of Sociology at Keele University. In 2009, she received the Post Ph.D. Research Grant to aid research on ”’The Mother of All Strikes’: Politics, Law and Vernacular Cosmopolitanism in Botswana’s Public Service Unions’ Activism”. In 2014, she received the Engaged Anthropology Grant to return to her fieldsite and share her findings with the public sector unionists who hosted her and academics and policy makers in Botswana.

Labor Songs Reverberate in the University of Botswana’s Library Auditorium

It was never going to be easy. Botswana may be ranked the No. 1 country in Africa for transparency but, equally, it probably comes first in snail-pace implementation: procedures, committees, consultations and long deliberations precede any action, so my aim of bringing together learned academics from the University of Botswana with manual workers for a public debate on ‘Inequality in Botswana’ was clearly a challenge demanding imagination, tact, patience and perseverance.

In fact, once we got our team together – myself, Elsinah Botsalano from the Manual Workers’ Union, Dr Sethunya Mosime from the Department of Sociology and Prof Patricia Makepe from Economics, we were unstoppable. As I watched workers stand up to sing their labor songs in the hallowed surroundings of the University of Botswana’s magnificent library auditorium, songs filled with gallows humor and deep emotion, I knew that our efforts had been vindicated – that the ivory tower had been breached not only intellectually but bodily and experientially.

It was important for the unionists that the proceedings should open with a prayer and a string of labor songs, as all union meetings are, and should close with a giant spread of delicious food, like all events in Botswana are, an essential feature of any gathering, or so I was told in no uncertain terms when I suggested, somewhat hopefully, that tea and cake might be okay. The debate was opened by the National Chairman of the union, who had travelled especially to the capital all the way from Serowe, and closed by the General Secretary. People were introduced and thanked according to protocol by Dr Mosime, who welcomed the audience on behalf of the University, and Professor Makepe, who chaired the event, trying desperately, against the odds, to keep time (12 minutes for each of the six debaters, clearly a futile hope).

The challenge of holding a debate organized jointly by the union and the university became apparent soon after I arrived in Botswana when I met the head of Sociology. He claimed to be ‘busy’ and saw no benefit for the department, he said, from such an event, reducing it, despite my denials, to a mere ‘launch’ (of my book, The Making of an African Working Class: Politics, Law, and Cultural Protest in the Manual Workers’ Union of Botswana, Pluto Press, 2014). He did finally agree to participate and to book the hall, only to announce soon after that he was ‘unavailable’ on the very day he himself had chosen.

So began a dance of shadows. It was only after he delegated the organization of the debate to an energetic junior colleague that the university’s participation was assured. The union too wanted a book launch. In the end, we compromised by having the launch right at the end of the event, following the debate.

Mobilising speakers was another challenge and the programme kept changing as speakers accepted, changed their minds or were unavailable after repeated telephone calls. As well as academics, we wanted representatives of the judiciary, Ditshwanelo, the human rights NGO, the trade union movement and the employers’ association. We needed urgently to print a poster and distribute it throughout the University and to the various unions and their workers well before the date chosen. But the poster was held up as speakers changed their minds and university managers demanded the correct logo, which had changed, changed again and then reverted to the original. Each step on the way was another hurdle.

The final letter of invitation to speakers stated that

Inequality has become the central topic of discussion and concern worldwide, even raised at the World Economic Forum at Davos 2015. In Botswana there has been a recognition of the problem of poverty but little public discussion of the widening inequalities between rich and poor, and the implications this has for our society. We hope to kick off this central debate.

…. The panel will include some six distinguished trade unionists, academics and public figures, each of whom will speak for about 10 minutes. This will be followed by refreshments and an open discussion with audience participation, before the book launch. … The event, supported by the Wenner-Gren Foundation for Anthropological Research, is open to everyone and we expect it to attract a wide spectrum of trade unionists, academics, students and other concerned citizens.

The Manual Workers’ Union had bought 75 copies of the book, and was in the process of distributing these to unionists and supporters among the great and the good in Botswana. I was not involved in the distribution, but Elsinah also gave copies to the speakers at the debate. On the actual day, we waited on tenterhooks for the debaters and audience to assemble. At the very last minute, Judge Dingake announced his withdrawal, claiming it would be unseemly for him to launch a book that had praised him (see below). Our anxiety mounted. Where were the other speakers? One by one, they trickled in, Tobokani Rari, Secretary General, Botswana Federation of Public Sector Unions (BOFEPUSU), rushing in last, straight from a union federation meeting about the bargaining council. Gradually, the audience assembled. While we waited, we put up a slide show of the public sector strike on the screen behind the speakers.

Academics from the University were last to arrive. As it turned out, however, there was no need to worry – this was just another instance of Botswana’s tradition of time keeping. The 200-seat auditorium filled and speakers spoke solidly for two-and-a-half hours, followed by questions from the audience. There was still time for a sumptuous buffet spread, served by a crew of charming young trade unionists. The book launch was managed by the University Bookshop, which sold out all its copies. This in itself was an achievement, since getting the book posted from the publisher in England turned out to be a challenge in its own right.

The debate got quite wide coverage. The Botswana Daily News, distributed free throughout Botswana at government, municipal and civic offices, carried a picture of me with Elsie Alexander, a speaker at the launch well-known for her gender activism, which (rather unexpectedly) highlighted the ‘activist’, ‘feminist’ message of the book. Perhaps the most flattering remarks, at least for me as an anthropologist, came at the end of the debate when the Secretary General of the MWU, Ms. Maophala Makgosi, speaking in Setswana, thanked me for helping the union to know more about itself.

By the time the debate was over we were all exhausted and needed time to recuperate. Elsinah, who had been a moving force in helping to organise the debate at the university, was now involved full-time with the public sector bargaining council. It took time to convene another workshop, this time the subject being the ‘Aftermath of the Public Sector Strike’. The workshop was chaired by the Union’s National Chairperson himself and it was an exclusively in-house affair, which gathered together all the elected representatives of the Gaborone region, some thirty in all. The result was an exciting, even unprecedented, brainstorming session which went on for two hours – a serious conversation among union activists, without any set agendas or need to reach any definite plan for future action, who found in the workshop a rare moment to reflect upon themselves and the union. I spoke briefly. This time, tea and cakes sufficed.

I (and Wenner-Gren) owe a special debt to Elsinah Botsalano, below in the red dress. Without her all the events described in this blog would not have been possible. 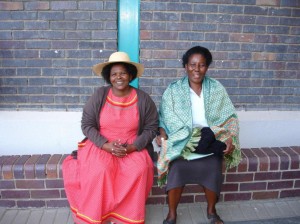