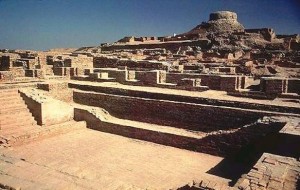 Benjamin Valentine is a Postdoctoral Teaching Fellow in the Department of Anthropology at Dartmouth College. In 2011, while a doctoral candidate at the University of Florida, he received a Dissertation Fieldwork Grant to aid research on ‘Isotopic Perspectives on Migration and Identity: A View From the Harappan Hinterland,’ supervised by Dr. John Krigbaum. Last year, he was awarded the Engaged Anthropology Grant to return to his fieldsite and share his research on this ancient Indian civilization with a diverse group of experts and laypeople.

Writing about the enigmatic nature of the Indus (or Harappan) Civilization, John Keay wrote in India: A History (2000), “Here too was a society with a distinct and extensive culture but, barring some not very helpful bones, no people, indeed without a single name.” His puzzlement is in many ways justified, but his characterization of the bones is due for an update. Although the South Asian peoples who authored one of the earliest urban societies left behind very few burials and skeletal remains, the bones that have been discovered are yielding surprising insights on the ways that individuals contributed to patterns of interregional interactions during the third millennium BC. By analyzing archaeological human tooth enamel for isotopes of strontium, lead, and oxygen, I have helped fill in the missing life‑histories of migration and mobility for individuals in the Indus Civilization cemeteries at Harappa (Pakistan), Farmana (India), and Sanauli (India). I have had the privilege of developing new models of early urban interaction using new analytical methods on some very old bones, but the bones cannot speak back to me and offer up their own interpretations. As a Wenner‑Gren Engaged Anthropology grantee, I was able to return to India and find out how my fellow academics and laypersons alike found meaning in the biogeochemical data.

I travelled to visit my colleagues in the Indian cities of Pune, Ahmedabad, Jaipur, and Delhi and spoke with diverse audiences to share the results of my work. I gave formal talks, participated in more casual fora, and solicited individualized feedback in the hopes of learning new ways to enrich the isotopic narrative. Likewise, I spoke with physical scientists, established archaeologists, students, and laypersons with each group offering a unique perspective and sense of how to proceed with the research. I shared my hypothesis that an ancient institution of fosterage helped to connect disparate peoples and discussed the potential impacts of this practice on broader cultural trajectories of continuity and change. The responses were variable, but several themes emerged. Some people perceived a new kind of legitimacy and command of the past in the application of multi‑disciplinary scientific methods. For others, the scientific narrative deserved no special weight. In considering the individual‑level data generated by isotope analysis, many people dwelled on what the personal experiences may have been like for the ancient migrants, their birth communities, and the receiving societies. Often, the inference of emotions in the distant past (typically revolving around familial separation) appeared to influence perceptions of the fosterage hypothesis as more or less credible. To various degrees, many I spoke with found elements of modern or historical practices in archaeological behaviors and vice versa.

Whether speaking with colleagues in the Archaeological Survey of India and the academy or more general audiences in the Center for Art and Archaeology in Gurgaon and elsewhere, the grant program also gave me an important platform for stimulating new dialogues on topics that to some have seemed obscure or inaccessible. Physical scientists at IIT Gandhinagar in Ahmedabad and laypersons alike seemed to appreciate the new perspectives on an old subject. Of course, many of the most engaged responses came from students at the Institute of Archaeology in Delhi and Deccan College in Pune. The biogeochemical methods that I used for my doctoral research remain uncommon in Indian archaeology, and students were quick to grapple with both the practical and theoretical implications of isotopic techniques for the disciplinary status quo. In this, I am hopeful that my Engaged Anthropology experience has helped to foster a more multi‑vocal archaeology and broadened the ways that people can engage with the past.