Engaged Anthropology Grant: Philip W. Scher and ‘The Politics of Historic Preservation and the Development of Heritage Tourism in Barbados’ 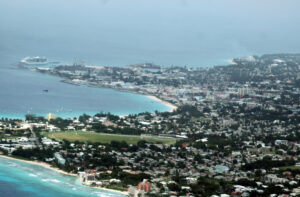 Philip W. Scher is Professor of Anthropology at the University of Oregon. In 2011, he received the Post-Ph.D. Research Grant to aid research on ‘The Politics of Historic Preservation and the Development of Heritage Tourism in Barbados’. He then received the Engaged Anthropology Grant to return to his Caribbean fieldsite and share his research with local educators.

In 2012 I spent six weeks conducting research in Barbados as part of a much larger project begun in 2008-2009. Much of my fieldwork involved interviews with educators in Barbados as I sought to gain insights from them as to the role of history and historical knowledge in the formation of Barbadian identities and Barbadian economic and social policies. During many of these interviews teachers expressed an interest in developing training that would allow them to understand the latest intellectual developments in the scholarship of heritage and bring that information to their students and fellow teachers. In the wake of the newly designated World Heritage Site of Bridgetown and its Garrison stakeholders wanted to think strategically about how historical sites are engaged by local constituents, about oral histories of local residents in these spaces regarding who worked there, who built them and who maintains them today and about intangible cultural heritage as a key element in safeguarding these important spaces.

With this in mind, then, two of my colleagues in Barbados, Dr. Tara Inniss of the Department of History at the University of the West Indies and Dr. Alissandra Cummins, Director of the Barbados Museum and Historical Society planned a workshop and lecture that would introduce local educators to some of the basic ideas of heritage studies.  Our hope was to focus on the people who participated in or observed past events in the World Heritage Property and whose memories and perceptions of these spaces are to be preserved as an aural record for future generations. The variety of perspectives generated by such interviews should prove to be an interesting addition to the written historical record and may offset the general perception that these historical sites are preserved either in the interests of the former colonizers or tourists or both. As the workshop began to take shape it was decided, based on feedback, to focus on one specific intangible cultural practice that many in Barbados feel is in danger of disappearing: the Barbados Landship.

Briefly, the Barbados Landship and its partner the Tuk Band are the most commonly seen Barbadian expressive cultural forms at public ceremonies, days of commemoration, visits by dignitaries etc. The Landship is both a Friendly Society of the type quite common in the Caribbean and its diaspora, as well as a performance tradition. It is known for its unique uniforms, parades, and carefully choreographed dances. During the heyday of the Landship, in the late 19th and early 20th century a large number of Landships existed across Barbados and many younger Barbadians today can point to one or another family member that had been involved in some way, most proudly as captains.

Landships are noteworthy because the organization was founded on a creolized replication of the ranks, discipline and orders of the British Navy. Members are known by ranks, are dressed in naval uniforms and march and perform “maneuvers” to the music of the Tuk Band, a fife and drum ensemble.

The Landship presents a unique challenge in the safeguarding of cultural heritage as it is universally touted as being a fundamental aspect of Barbadian identity, yet it has very few practitioners left. The question we wanted to address in our workshop and in the lecture and discussion was: is Landship capable of being maintained? If so, what are the mechanisms by which the tradition may be carried on, if not, what other ways may the tradition be remembered?

The workshop and lecture took place over a three-day period from February 16th to February 19th of 2015. The workshop was held at the University of West Indies and was open to anyone interested in the subject. The lecture and discussion session took place on the grounds of the Barbados Museum. The workshop lasted several hours and was attended primarily by scholars and those interested in heritage tourism, but also by key figures in the Landship movement itself.   The themes ranged from the historical and political context of Landhsip to the UNESCO conventions on safeguarding intangible heritage. The lecture gave an analytical and theoretical framework for understanding Landship in the broader context of heritage studies and was based on my previous research into these issues. The lecture was free and open to the public and was well attended and followed by a lively discussion.

In general the two activities produced a focus on what we began to define as heritage relevance. That is, many were concerned not only with heritage as a set of cultural practices that could be preserved in some kind of static way, but in creating opportunities around traditions that increasingly kept such activities relevant to younger Barbadians; and not simply as aspects of the expansion of heritage tourism products.

The generous support of the Wenner-Gren Engaged Anthropology Grant provided us with the opportunity to begin to develop a conversation about heritage in the Caribbean that expands beyond both economic utility or simple preservation tactics and school programs. This conversation, we hope, will continue and will add sophistication and nuance to government policies about the future of Barbadian culture and heritage. The grant has also fundamentally improved my own thinking about the subject of Caribbean heritage and resulted in an article about Landship that includes many of the ideas generated in the workshop.