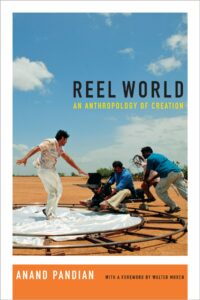 Anand Pandian is an Associate Professor and Director of Undergraduate Studies at Johns Hopkins University. In 2008 he received a Post-Ph.D. Research Grant to aid research on “Framing Feelings: Landscape and the Production of Affect in South Indian Cinema”. In 2012 Dr. Pandian received an Engaged Anthropology Grant to aid engaged activities on “Engaging Vernacular Publics in an Anthropology of Cinema”.

In November of 2015, I published a book called Reel World: An Anthropology of Creation with Duke University Press. The book examines the creative process of filmmaking in India, building on many years of fieldwork with directors, cameramen, actors, editors, composers and other artists and professionals working in the Tamil film industry of south India. This is one of the largest film industries in the world, with tens of millions of avid fans and consumers, highly keen on these films and deeply curious about the invisible process of their creation. In writing this book, it was therefore important to me to try to reach not only other academics such as myself, but also a wider lay audience in India.

One element of this endeavor has been to publish a more accessible trade edition of the same book in India with Penguin Random House Books, which appeared in print in January 2016. A second element of this endeavor has been to reach a vernacular public of Tamil language readers in south India through a Tamil translation of the trade edition. It is here that an Engaged Anthropology Grant from the Wenner-Gren Foundation for Anthropological Research has proved essential. The fieldwork itself for this project was supported by a Post-PhD Grant from the Wenner-Gren Foundation as well as research grants from the American Institute of Indian Studies and the National Foundation. Thanks to this new program for Engaged Anthropology, however, I have been able to work closely with a Tamil translator in preparing a vernacular edition of this book and my research.

The individual I have worked with most closely on this translation project is a Tamil writer and translator based in the south Indian city of Chennai, V. Kamalalayan. I first met him in 2011, when we began to work together on a previous book project that took my nonagenarian grandfather’s life in India and Burma as a prism through which to examine a century of history in modern India. Kamalalayan and I worked together closely on that project, and he was the most natural person to whom to turn in pursuing a Tamil translation of this next book. He and I have been working together closely on this translation, chapter by chapter, with insights and advice also gleaned from other writer friends and colleagues in south India. The translation is complete now, and in the stage of final editing, with our next task being one of identifying the right Tamil publisher for the book.

Our goal with this project has been to make the stories and ideas that animate the book as engaging and accessible as possible to a broad-based Tamil audience. I have already seen that this is possible with the English-language Penguin edition of Reel World, which has been reviewed very favorably in the last few months in leading popular newspapers such as The Hindu and The Telegraph. We hope and expect that the same will be the case with regard to the Tamil edition. Our plan is to submit the book to an appropriate publisher very soon, and to have the book published in advance of the 2017 Chennai Book Fair, the most important annual event in the world of Tamil letters. By means of this project, I hope to reach, as readers, some of those who have made the very phenomenon I studied, Tamil cinema, possible and appealing as a medium of cultural expression in contemporary India.