While a doctoral student at University of Kent, Laura Montesi received a Dissertation Fieldwork Grant in 2014 to aid research on “Making Sense of Diabetes Among the Indigenous Huave People of San Dionisio del Mar, Oax., Mexico,” supervised by Dr. Anna Waldstein. After successfully defending her dissertation Dr. Montesi received an Engaged Anthropology Grant in 2016 to aid engaged activities on “Structural Food Nostalgia in Times of Diabetes”.

I arrived in Mexico in the aftermath of the Nochixtlán repression. In several Mexican states teachers had taken to the streets in protest of federal education reform. The government’s subsequent repressive acts were fiercest in Nochixtlán, a municipality on the outskirts of Oaxaca City. On the 19th of June, the confrontation between striking teachers and the federal police left a death toll of twelve civilians. 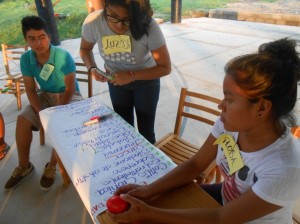 The education reform includes teacher evaluations aimed at selecting “good” public school teachers. Opponents argue that such evaluations allow the government to justify mass layoffs and the gradual demolishment of public education, and that they also ignore the ethno-cultural, linguistic and socioeconomic diversity of the nation and punish teachers stronger in traditional knowledge systems than in the national, hegemonic curriculum.

It was in this atmosphere of tensions that I reached my fieldsite, San Dionisio del Mar, an Ikojts/Huave community of 3,000, located in one of the most politically unstable regions of Oaxaca, the Isthmus of Tehuantepec. Here, the teachers’ discontent combined with other social demands, such as the defense of the territory against aggressive industrial exploitation.

My Wenner-Gren workshop, which promoted reflection on the link between health, food practices and cultural identity, was designed to be participatory and collaborative, encouraging research-actions that build upon the participants’ interests and skills. In a way, this engaged workshop is consonant with the social movements in Mexico that are fostering a transformative and culturally plural kind of education.

My PhD explored the experiences of Ikojts rural men and women living with diabetes in San Dionisio. In my research, I scrutinized how Sandionisians make sense of diabetes at a personal, family and community level. I discovered that diabetes is an idiom for vulnerability, namely a manifestation of structural and ordinary violence, and a metaphor expressing compelling concerns. These concerns include changes in the local diet, the most tangible sign of a more general loss of cultural identity and cohesion.

With my Wenner-Gren grant, I could stay in San Dionisio for a month and work with younger members of the community (high school students, aged 15-16). They documented, analyzed and produced materials on past, present, and future foodways through photographs, interviews, and videos. A holistic view of health emerged from the multiple relationships discovered between wellness, ecology and local knowledges.

The workshop was divided into four main parts:

During the first week, my colleagues — Adolfo Rebolledo (ecologist), Juan Pablo Mayorga (journalist specialized in environmental topics), and Diego Martínez (documentary maker) — and I encouraged discussion on a range of related topics: everyday diets, origin of food resources, characteristics of local and imported/processed foods, emerging diseases and the epidemiological transition, and the nature of diabetes, including its medical and social aspects.

These topics were addressed through a number of activities. For example, the participants categorized their food and beverage intakes of the previous 24 hours into sets. Some chose to classify them by nutrients, others by origin, others by when eaten. All identified comida chatarra, junk food, as an independent food category, prompting us to analyze processed food labeling. As a result, the students realized how little pre-packaged food labels revealed and how privileged they were to have locally produced foods such as corn, fish, shrimp, and fruits. A territory mapping exercise followed, with workshop participants asked to draw San Dionisio del Mar and all its surroundings, and to locate its sources of food. This exercise helped us rethink the value of local food systems and the implications of food dependence on community well being. We also interviewed elders about the social, dietary and health changes they have witnessed. The students enjoyed being researchers in their community.

During the second week, they received training on the basic principles of interviewing as well as documenting through photographs and videos.

The third week was dedicated to research projects. One group explored the fishing techniques of poor fishermen and analyzed the unequal relationship between Ikojts fishermen and external, often Zapotec, traders. In a wonderful documentary they made, they express the hope that Ikojts fishermen will be able one day to compete more fairly.

The second group exemplified the dietary transition in a photo essay portraying an Ikojts woman, Doña Carmela, preparing supper. Diabetic, Doña Carmela told her interviewers that she is confused about processed food: “My daughter-in-law cooks Maruchan pasta often. My husband thinks it’s not good and causes cancer. I sincerely don’t know.” Her words reflect how uncertain people are about food today.

The fourth week of the workshop ended with the presentation of the students’ work at the local high school. Pupils from other classrooms and the students’ families were invited. I also shared my research results and underlined the importance of community-based initiatives that, conjugating scientific and community knowledge, craft appropriate responses to local needs. The project met with great approval, and the students’ families requested it be repeated next year. May this be the first of similar initiatives!

As part of my Wenner-Gren activities, and thanks to the initiative of anthropologist Citlalli  López, I also helped organize an intercultural exchange between the teachers of San Dionisio del Mar and the educational community of the Intercultural University of Veracruz (UVI). This university, which offers bachelor degrees to young minority and/or disadvantaged students, is nationally recognized for its strengthening of communities’ knowledges and practices. I traveled with my friend Obdulio Muriel, an Ikojts teacher, to the UVI in Zongolica, in the state of Veracruz. Obdulio, an advocate of linguistic rights, and I have worked together on several projects.

At the UVI, we presented our work in the interrelated fields of language/culture revitalization and traditional medicine. In exchange, the UVI students and teachers, mostly Nahuatl speakers, showed us their projects on environmental and food systems conservation. We all found that our topics display interesting overlaps and agreed to continue this intercultural exchange.

At the end, Obdulio said: “This experience was very useful. I feel satisfied because I was able to make public all the work that we [the school he works in] have done and that usually remains confined to our small village. Reciprocally, the people here showed us the work they are carrying out with their communities, and this can be an example we [the Ikojts] can follow.”

These exchanges of ideas and experiences, which were helped by the Wenner-Gren grant, should have a place in academia as well as in the public health sector. To this end, I presented the core themes of my research to diverse audiences. During one presentation, given at CIESAS (Centro de Investigaciones y Estudios Superiores en Antropología Social), I met with Mexican anthropologists working on diabetes among indigenous peoples. This was a valuable opportunity to make ethnological comparisons and explore future research collaboration. With medical doctors and nurses at a public hospital in the northern state of Tamaulipas, which has one of the highest prevalence rates of diabetes in Mexico, I shared a sociocultural perspective on diabetes. The medical staff talked about its successes and failures in working with diabetes patients, and was glad to learn about a more “humanistic” approach to this metabolic disorder.

Overall, all these experiences made me realize how transformative anthropological research can be when we dare to cross spatial, cultural, and disciplinary frontiers.