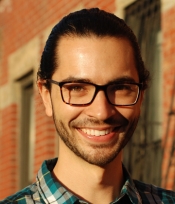 While a doctoral student at City University of New York Graduate Center, New York, Andrew Hernann received a Dissertation Fieldwork Grant in 2012 to aid research on “Ethics on the Margins: Religious Transformation in a Labor Regime in Timbuktu, Mali,” supervised by Dr. Gary Wilder. Then in 2016 Dr. Hernann received an Engaged Anthropology Grant to aid engaged activities on “Narrating Crisis: Collaborative Storytelling in Post-Crisis Timbuktu.”

Through my Engaged Anthropology Grant, I was able to intensify and decenter my collaborative research among northern Malians by organizing the production and exchange of local narratives of occupation, displacement and military intervention. In 2012, northern Mali was occupied by ethnic Tuareg nationalists and allied religious extremists. As this cohort of armed militants attempted to occupy more central and southern regions of the country, the French and UN armies intervened, pushing the fighters north into the desert. Officially “liberated” in 2013, northern Mali – especially the city of Timbuktu – has remained dangerous and in crisis. Indeed, there remains the ongoing threat of terrorist attacks, as well as the foreboding nature of a foreign military presence. While many Timbuktians have returned to northern Mali, many have also chosen to remain displaced, particularly in Bamako, the Malian capital. Furthermore, some subtle and not-so-subtle tensions remain among differing ethnic groups and between rural and urban Malians.

Such conditions foster the development of unofficial narratives among those experiencing displacement and occupation, particularly as residents continue to feel misrepresented by foreign organizations that seem reluctant to substantially engage with local communities. However, and as has been my experience working with residents of northern Mali, such conditions also foster a level of secrecy that somewhat limit the exchange of such narratives. Storytelling, nevertheless, retains empowering and reconciliatory effects, especially during times of crisis. Therefore, while in Mali during summer 2018, my interlocutors and I organized two storytelling workshops during which participants developed and shared their experiences of the northern Malian crisis with one another. The participants were of diverse socioeconomic, ethnic, racial, gender and professional backgrounds, including students, teachers, religious experts, humanitarian workers, UN contract employees, tourist guides, journalists and community activists.

I offered my experience facilitating collaborative storytelling during these workshops. However, given the importance of incorporating local and culturally relevant values, I emphasized a more collaborative approach, empowering my interlocutors to organize and facilitate these workshops as they best saw fit. Therefore, while occurring over multiple days, the workshops took on a seemingly more “informal” element relative to those more common in the USA. They were less structured than I had originally anticipated, with more down time spent chatting over tea and meals. Nevertheless, participants were able to successfully share their experiences and analyses of the ongoing Malian crisis and organically develop and re/produce authentic, culturally resonant products. Unfortunately, due to ongoing security concerns and the (then) upcoming presidential elections, a shadow of secrecy clouded the workshops. In order to facilitate the safe production of crisis narratives among participants, the group decided not to permit photography/video/audio recording, the use of full names or a written version of their stories. However, most expressed feeling able and eager to reproduce the storytelling workshop format that we developed in increasingly local settings throughout Bamako and northern Mali as a way of distributing stories and facilitating the catharsis that such storytelling often produces. Furthermore, our hope is to publish both a manual of how to conduct similar workshops and a written version of the stories developed this summer – stories which many of my interlocutors jokingly stated were more authentic and analytically useful than anything that an outsider would be able to produce – when they collectively sense that the need for secrecy has abated.