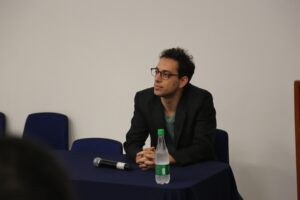 Alex Fattal is a Mellon Postdoctoral Fellow at the Mahindra Humanities Center at Harvard University. In 2009, while a Ph.D. student at Harvard, he received a Dissertation Fieldwork Grant to aid research on ‘Guerrilla Marketing: Information Warfare and the Demobilization of FARC Rebels,’ supervised by Dr. Kimberly Susan Theidon. Last year, he received the Engaged Anthropology Grant, enabling him to return to his fieldsite in Bogota and share his research with the community that hosted him.

Over the course of late July and early August 2014, I traveled to four cities in Colombia to share the findings from my dissertation research, Guerrilla Marketing: Information War and the Demobilization of FARC Rebels with Colombian scholars and policy-makers. That research was funded in part by the Wenner-Gren Foundation’s Dissertation Fieldwork Grant.

I presented my conclusions in a political context in which peace negotiations with the Revolutionary Armed Forces of Colombia (FARC) have reached an advanced stage. Provisional agreements have been signed for three of the five agenda items. This made my research into the individual demobilization of FARC combatants all the more germane to my audience. I shared my work at four different universities: La Universidad de Antioquia in Medellín, ICESI Universidad in Cali, la Universidad del Norte in Barranquilla, and the Universidad de los Andes in Bogotá. The audiences were very engaged in my presentations, often asking lively questions about Colombia’s much-anticipated “post-conflict” future. 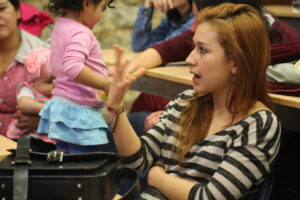 Much of the discussion that my presentations generated spun around the implications of my research for the current peace process in Colombia, and how representational practices are playing a crucial role in the political struggle to support or undermine the peace process. Although it is an ongoing story, one of the primary conclusions from the discussion was that the Santos Administration needs to do a better job of communicating the progress that is being made in the negotiations, rather than assuming a reactive posture to those who have cast aspersions on the process and doomed it to failure.

I also extended my engagement with Colombian audiences, as planned, with a few regional and national media outlets. In addition to the presentations I gave interviews to campus media groups, and local and national media outlets such as El Universal and Semana. I only hope that I was as articulate as I implored the government to be. I advocated for a radical reorientation of the current model of demobilization in anticipation of the collective demobilization to come. (I have crystallized my policy recommendations in a paper I put together with Colombian colleagues here). 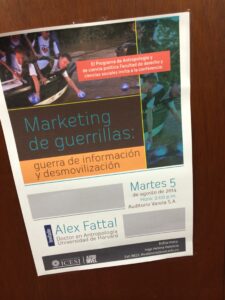 My thesis research also included a documentary film project that is in the middle of production. I shared a very rough cut of that visual ethnography in each of the four cities. The film, Dreams from the Concrete Mountain, enters into the psychological worlds of former combatants who have been both perpetrators and victims of the country’s ongoing civil war. The film project centers on a series of interviews with former insurgents inside of a truck that I have transformed into a camera obscura. That space becomes an intimate place for recounting life trajectories entangled with the social problems that are the root causes of the conflict, and the armed confrontations that are its most visible symptoms. Audiences were intrigued by the filming technique and impressed the direct style of narration, stories they might have heard before but through the words and framings of experts and others who speak as surrogates for ex-combatants. The dialogue that emerged around the film gave me a series of ideas as I continue to shoot and edit this project, and injected me with enthusiasm that the project is fulfilling its main goals: to humanize and complicate the figure of the former guerrilla fighter.

I am extraordinarily grateful to the Wenner-Gren Foundation for enabling me to share (or socializer, one of my favorite Spanish words) with Colombian scholars, students, and policy makers. I would like to acknowledge the help and support of my hosts at the Universidad de Antioquia, Universidad ICESI, Universidad del Norte, and Universidad de los Andes, more specifically the colleagues that helped make it happen: Jonathan Echeverri (Antioquia), Inge Valencia (ICESI), Diana Rico (Norte), and Pablo Jaramillo and Monica Espinosa (Andes).