Engaged Anthropology Grant: Hiba Bou Akar and “Talking Sectarianism: Community Workshops on Urban Planning, the Built Environment, and the Fear of the Religious Other in Beirut’s Suburbs” 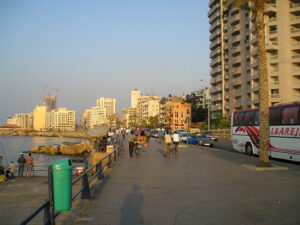 Hiba Bou Akar is Assistant Professor of Urban Planning and Middle East Studies at Hampshire College. In 2009, as a doctoral candidate at the University of California at Berkeley, she received a Dissertation Fieldwork Grant to aid research on ‘Rebuilding the Center, Expanding the Frontier: Reconstructing Post-War(s) Beirut, Lebanon’ supervised by Dr. Teresa P. Caldeira. She received the Engaged Anthropology Grant to return to her fieldsite and host a series of workshops designed to impart her research to local scholars and the community that hosted her.

Between 1975 and 1990, Beirut was synonymous with war, chaos, and violence. The city endured a long civil war where sectarian divisions among Christians, Shiite, Sunnis, and Druze played a major role. While the 1990s were seemingly a peaceful period of reconstruction, sectarian violence returned to the city in 2008, bringing back with it the specters of the civil war. Beirut, often described as divided between a Christian East and Muslim West along the “green line,” has been dissected since by hundreds of “green lines,” transforming many a neighborhood in a new logic of contestation and war. My Wenner Gren-funded dissertation research (2009-2010) examined the spatial production of three of Beirut’s peripheries-turned-frontiers by investigating the spatial practices that have shaped them as frontiers of sectarian violence and feverish urban growth. My dissertation study showed how, since the 1990s, spatial contestation, conflict, and war have occurred less through manifest violence (of rifles, tanks, and canons) and more through the production of a spatial order of political difference within what I call the spatial and temporal logics of the war yet to come. Instead of approaching war as a temporal aberration in the flow of events, with a beginning and an end, the study has focused on how war, violence, and their anticipation have become governing modalities of Beirut’s southern peripheries, regulating their urban growth and poverty, marginality and violence. Key actors in the production of these geographies are the main Lebanese religious-political organizations including the Shiite Hezbollah, the Sunni Future Movement, and the Druze PSP, and Christian Maronite religious-political groups. Examples of these practices include contradictory urban planning policies, discriminatory property laws, uneven provision of infrastructure, and the militarization of everyday life.

Nowadays, as a result, many of these peripheries-turned-frontiers neighborhoods —especially lower income areas— are in dire environmental conditions. They suffer from poor infrastructure, lack of tenure security, congestion, pollution, the destruction of the few remaining green spaces, and a fear of the religious Other living across the street. They are also characterized by political stalemate and the fragmentation of decision-making powers. Several community groups are currently organizing to raise local awareness around the significance of improving the living conditions in these contested peripheries. They are also working to garner the support of public agencies, religious political organizations, and aid organizations to bring about social change.

During the summer and winter of 2014, with the help of an Engaged Anthropology Grant (EAG), I started the process of sharing my work with a number of these community groups and residents by holding several informal meetings in two of my research sites. The participants came from diverse political spectrum. The meetings were vibrant with discussions and debates about the history and politics of the area. We also often discussed the possibilities of thinking of the built environment as common grounds to work across political and sectarian dividing lines to improve the areas’ living conditions.

In addition to sharing my research findings, my aim was to use the knowledge I acquired during my field research, building on my expertise as an urban planner and my experiences a long term resident of the area to help formulate and inform on-ground interventions. The EAG grant gave me the opportunity to become involved with one non-governmental organization (NGO) in particular that is focused on urban planning issues. One of their projects focuses on improving the conditions of The Old Saida road. This road emerged in May 2008 as a bloody battle line between the Druze part of Choueifat and its neighboring Shiite Sahra Choueifat. With years of neglect and conflict, the road has become unsafe for the thousands of people who use it and live alongside it. This NGO, among others, has been successful in initiating small-scale awareness campaigns in Choueifat and surrounding areas around driving safety, building regulations, garbage disposal, etc. As they move to take on larger issues, efforts are underway to build coalitions and collaborations to build a vision for possibilities for intervention.

During the first phase of our work together, we organized several meetings/workshops to brainstorm about how to approach the issue: discussing what is feasible, who are the entities that we need to target, etc. So far my engagement has been in two capacities: First, I shared my work findings and data to explain the multitude of reasons that have transformed Choueifat into a contested frontier of violence and urban growth, and the impact of these practices on the deteriorating living conditions. Second, I shared my knowledge about urban planning interventions in contexts of conflict, informality, etc. We also had discussions on the practice of urban planning in Lebanon and the possibilities for community organizations to participate in shaping planning policies. My task was to also raise awareness about the politics of proposed planning interventions explaining the implications of each proposed project on disadvantaged populations.

What became clear in these workshops is the need to work towards building an institutional support network that could provide expertise, funding, and political support to help them formulate and realize concrete interventions. Since planning institutions practice in Lebanon does not yet have the tools that would allow for community input, we decided to initiate a participatory planning workshop that would include relevant entities (municipalities, residents, political parties, experts, public agencies, private planning practice, etc.) to discuss and agree on feasible projects to implement. The two-day workshop will be held in Choueifat in August 2015. For that purpose, I approached the UN-Habitat’s Beirut office to seek its support. For the past four years, UN-Habitat has been working on reforming urban planning practice in Lebanon and was excited to support such a project. I am also in conversations with the urban planning academic community at the American University of Beirut to ask for their input. If such workshop proved successful, UN-Habitat proposed to use it as a model for other area facing similar problems. With the NGO’s input, I am currently in the process of putting together a detailed proposal for UN-Habitat. Meanwhile, we are preparing the groundwork for the workshop (discussion points, schedule, invitees, strategies, etc.). The workshop will hopefully be the first step towards opening up dialogue for social change in these contested areas.